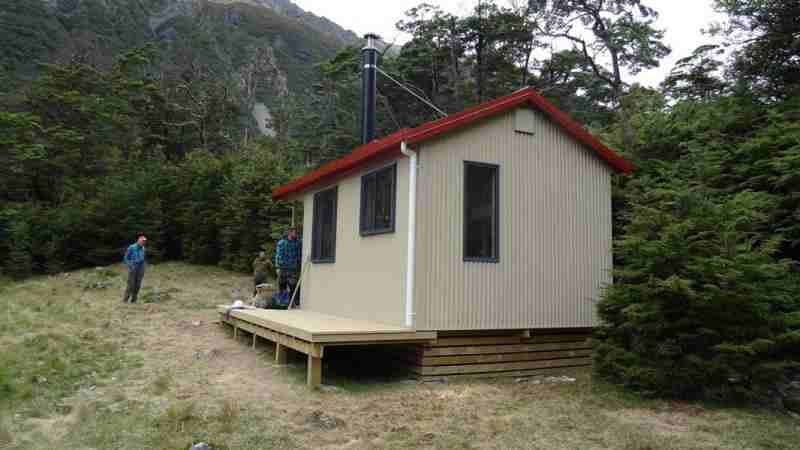 Trampers crossing the Waiau Pass between Nelson Lakes National Park and St James Conservation Area will find the new six-bunk Waiau Hut a welcome sight at the end of their 15km trek.

The new hut replaces the basic two-bunk Caroline Creek Bivvy, cost $155,000 and was paid for by retired Timaru farmer Robert Birks. The donor said he wanted to give something back to the country's world-class Department of Conservation hut network, as well as the Te Araroa Trail initiative.

The standard hut costs $5 per night and was official opened on Saturday 27 January 2018. The hut is located 3km down valley from the existing bivvy, about an extra hour walk from the Waiau Pass. Alternatively the hut can be reached with a 90 minute walk from the end of the 4WD track in the Waiau Valley or a 3½ hour walk over Maling Pass from the Tophouse Road.

The Cobb Dam Road is closed due to the washout of the approaches of the Lower Cobb Bridge and because of numerous slips on the road itself as a result of Cyclone Gita on 20 February 2018.

The Graham Valley South Branch Road to the Flora carpark is closed because of slips also as a result of Cyclone Gita.

John Reid Hut in the Wangapeka Valley has been renovated by Nelson Tramping Club members during January 2018 with funding from the Outdoor Recreation Consortium. A new wood burner and new chimney have been installed, replacing an open fire. Also a new benchtop was installed and the ceiling lined in the six-bunk hut. Further renovations are planned during March.

DOC Nelson Lakes has experienced significant increases in the cost of supplying firewood to the huts on the Travers-Sabine Circuit in recent years. The increase in visitor numbers has seen the usage of firewood rise dramatically resulting in the need to resupply more frequently.

In an attempt to deal with these rising costs, changes have been made to the supply of firewood to the huts. Rather than traditional split firewood, long lengths of slab wood are being supplied, which is a by-product of the sawmilling industry. This is supplied along with a saw horse, handsaws and information on how to safely cut the slab wood to appropriate lengths. The slab wood is significantly cheaper to purchase and trials have shown that the use of firewood by hut users falls dramatically when supplied in this form.

Associated with this, the wood burning stoves on the circuit have been modified to prevent visitors using them for cooking, which was increasingly being seen in the huts and again increased the amount of firewood used.

Bull Paddock Creek Hut in the Raglan Range has been closed temporarily after failing an engineer’s inspection. It has very little use, and has been looked after by one family (95% of visits are from this family). There is no marked route to the hut, so the impact for trampers is very limited.

Te Araroa walkers are now being redirected from Red Hills Hut along the Maitland Ridge Track to the Tophouse Road rather than down to the Red Hills carpark. This reduces the distance road walking needed on SH63 to St Arnaud.

The two Hodder Huts have undergone maintenance during January 2018 by Marlborough Tramping Club members. The main work was the repair of the tank stand after being damaged during the Kaikoura earthquake in November 2016 which had caused one water tank to lay back onto the hut. In addition the Tararua Hut was repainted internally and the porch was extended on the Murray Adrian Hut to make it more weather-proof. The Hodder Huts are on the route to Tapuae-o-Uenuku in the Inland Kaikoura Range.