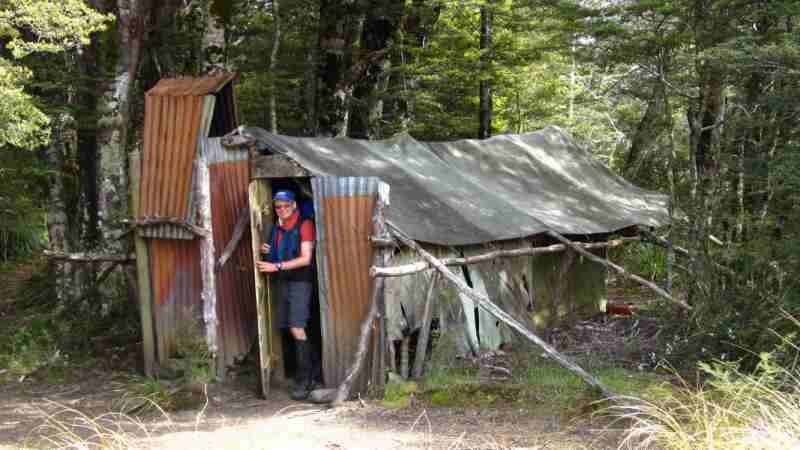 There is a large slip 100m across on the Cobb Valley Track which was most likely caused by a combination of the earthquake on 14 November 2016 and heavy rain. The slip is located ten minutes downstream from the Cobb Tent Camp between Chaffey and Fenella huts.

Stone Hut has been repainted and a new prefabricated woodshed has also been installed.

Track clearing has been carried out on the Fyfe River Route involving nine workers over 3½ days.

The Matiri Valley Track has been cleared after work was last done twelve years ago.

The resurfacing of the track to Mt Arthur Hut has been completed.

As a result of overcrowding, a new replacement Mt Arthur Hut is being considered, but may not be constructed for a few years. It would be sited at the bush edge, 200-300m from the existing hut. A lack of space prevents a new larger hut being built at the current site.

New windows have been installed in the northern wall of Flanagans Hut by volunteers from Motueka Tramping Club giving better ventilation.

A new wood burner has been installed at Upper Gridiron Hut in March 2016 after the previous unsafe wood burner was removed some time ago.

Blue Lake Hut has been repainted internally and externally and a new wood burner has been installed. A covered deck will be constructed and another toilet will be installed. A bivvy will be sited near the hut for warden’s accommodation. A dedicated camping area with toilets will be provided near Blue Lake with increased interpretive signage. The improvements to facilities at Blue Lake come as a result of increased usage, mostly from Te Araroa trampers.

Different firewood supplies for some huts in Nelson Lakes are being trialled. Long lengths of slab wood from forestry offcuts are being provided along with sawhorses and saws. This is a result of a large amount of firewood being used this year. Nine tonnes of firewood was flown in to eight huts on the Travers Sabine Circuit in May 2016. This was used up six weeks later, then a further eleven tonnes was flown in.

The Watson Creek Track in the Matakitaki Valley has been rerouted and windfalls cleared earlier this year.

Avalanche mitigation work has been carried out at John Tait Hut. Because of the avalanche risk the future of the hut is being considered.

One of the Travers River swing bridge towers has been repositioned ten metres further back from the river because of riverbank erosion.

Windfall clearing has been carried out on tracks in the Travers, Sabine, and D’Urville valleys and on the Mt Cedric Track recently.

A water tank has been installed at Relax Shelter which was refurbished last year.

A new track will be constructed linking St Arnaud village to the Teetotal campground and the adjacent biking tracks.

Track clearing has been carried out in Lees Creek, Connors Creek, Hamilton River and Begley River, all in the Upper Wairau Valley recently.

Nelson Honey Ltd has bought the lease to Rainbow Station from Lone Star Farms but no immediate changes to public access are planned. From Boxing Day to Easter Monday the gates are open and a toll of $25 per 4WD vehicle is payable to the gate manager on the way through. Between Easter Tuesday and Boxing Day the gates are locked and to obtain access contact the Rainbow Station Farm Manager, phone 521 1838 after 6.30pm. Access forms are required to be completed and signed by users at all times.

A water tank has been installed at Porters Creek Hut and a wood shed has been constructed.

A larger water tank has been installed at Slaty Hut.

DOC is urging people to stay away from huts and tracks in South Marlborough until further notice as they continue to assess damage after the 7.8 magnitude Kaikoura earthquake on 14 November 2016.

Both the two-bunk Barratts Bivvy and the historic Barratts Hut in the Seaward Kaikoura Range were swept away in a large slip and are buried. Both huts, located close together in the remote Hapuku Valley, were small and had low use.

The Hodder Huts and the route to them are closed until further notice. An assessment by helicopter soon after the earthquake showed the huts looked undamaged except for a water tank and tank stand.

Sawcut Gorge is closed to the public for safety reasons. The Waima Valley suffered from numerous slips after the earthquake but the condition of Sawcut Gorge itself may not be known for a while.