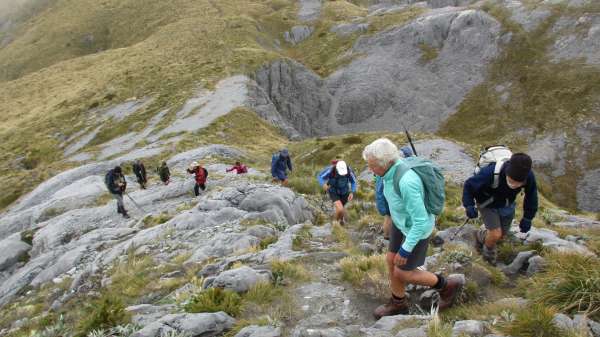 The popularity of the Mt Arthur and the Tablelands area was evident as we squeezed our vehicles in at the near-full Flora carpark of 32 cars. The twelve of us set off in sunshine, above the cloud below in Tasman Bay. The wide and newly upgraded surface was a breeze as we quickly made our way up to Mt Arthur Hut for our first cuppa. But by now the cloud had come over and it stayed for the rest of the day. We all continued up the well-worn ridgeline amongst tussock vegetation and marble outcrops. The first steeper section of track has become badly eroded and is in desperate need of remedial work. Mist and occasional drizzle came and went, giving an almost eerie appearance to the unique landscape of Horseshoe Basin. A few of the group had some trepidation crossing loose stony steep slopes, but with some encouragement, we all achieved the summit taking 3½ hours altogether. We did not stop long on the peak because of the cold wind so we retreated to below the ridgetop for our lunch.

Many trampers would not realise that NZ’s deepest cave system is located near the Mt Arthur Track – a few hundred metres below the surface, at the junction of the Gordons Pyramid and Mt Arthur tracks. A link between the Stormy Pot and Nettlebed systems was discovered in 2011, making a 38km long passage. The cave drops 1200m, making it the deepest cave in the southern hemisphere.

We had met a large number of 30 or 40 other trampers on the track, the majority of which were overseas people, indicative of recent increased tourism. This is opposite to the last club trip here in March 2014 when the bulk would have been local people. We returned to the carpark satisfied to have reached the summit, a first for some. We were keen to return another day for better views.