A decent day out 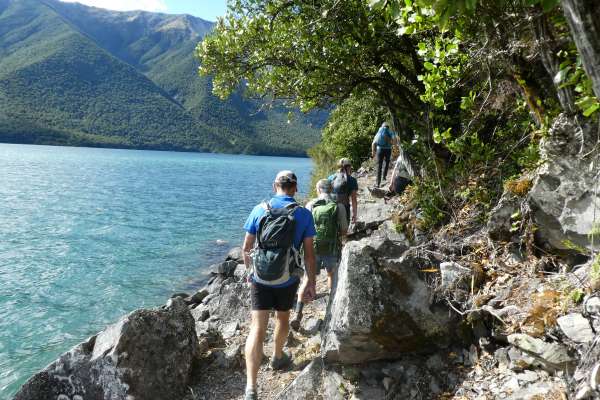 There were five of us ready to partake on an easy but long hike around Lake Rotoiti on a cloudy but fine day. A powerboat regatta was going on for the weekend, but it did not interfere with our plans. After a short car shuttle, off we went from Kerr Bay on the Lakehead Track. This part of the track is mostly in bush and was very wide. The bird life was abundant - fantails, robins and a tomtit were spotted. About 40 minutes later the trail goes out near the water, so we had a morning tea stop, including coffee and scones, with the boat races starting up. As we left, our number grew to six, as one of the spectators from the boat race didn’t fancy watching that all day, so thought a 90 minute walk would break up the day. What was noticeable too, was that there were very few wasps, but sandflies were in numbers. Our lady friend turned back, but our number grew to seven as two young backpackers caught us up, thirty minutes out from Lakehead Hut. After a brief chat I thought they may take off and do their own thing but they wanted to hang out with us and were there until the end. Lunch was had at Lakehead Hut at a pleasant spot on the verandah, even if the sandflies were annoying.

So the next challenge was the Travers River crossing, to get to the other side, but that was no big issue. Yes, we got wet feet, but no one fell over and one chap even brought a pair of plastic sandals for that part of the trip. Coldwater Hut was reached shortly after that and we stopped for a breather there. Continuing along, we headed north along the western shoreline, which was much drier than the other side and then we came to a side track to Whiskey Falls. We decided to skip this one as time was getting on, so the group marched onwards, the sun came out and the track opened up a little and we climbed a slight hill before we had afternoon tea. Before we knew it, Mt Robert Road was reached and we arrived at the car by 5pm. This is an ideal hike for someone fairly new to tramping, but wants a decent day out, and in the summer of course there’s the swim in the lake. Those on the tramp were: David, Maria, Alison, Lesley G and visitor Grant.