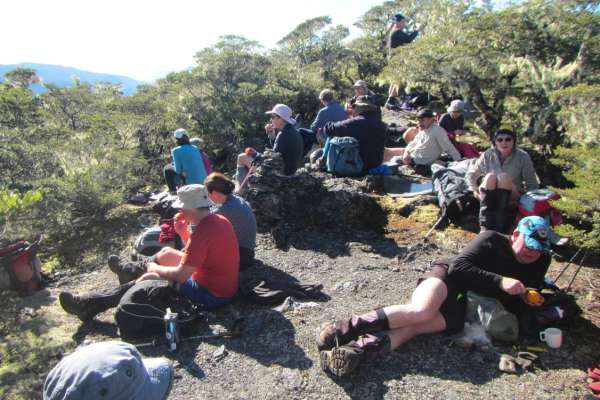 Twelve keen trampers met at the Badminton Hall at 7.30am for an early start to a reasonably long day hike. Fortunately the road up to the Flora carpark was in good condition and we started up the Lodestone Track from the carpark at 8.45am. It was a cool, almost frosty morning but we soon warmed up with the climb up Lodestone. Not far from the bushline we were suddenly passed by the fastest member of the eleven-strong group from Nelson Tramping Club which happened to be doing the same tramp. While having morning tea on the summit of Lodestone we enjoyed great views in the very clear weather and the company of part of the Nelson group.

From the summit of Lodestone we headed north along a bush covered ridge and followed pink trapping line markers until the ridge ended and the line headed in the direction of the saddle between Hodder and Lodestone. Dropping down to the saddle is very steep in places but the leaves of mountain neinei (dracophyllum traversii) thick on the ground, made sliding down easy. At the saddle we changed to following yellow trap-line markers which led us uphill and onto Mt Hodder. Our lunch spot was in an open area about 50m from the summit. It was very pleasant sitting in the sunshine, with no wind and great views across the Mt Arthur Tablelands and out to Golden Bay.

From the top of Mt Hodder we carefully followed the yellow markers along the crest of Hodder then dropped down to the saddle at the head of Saddle Creek. At the saddle we suddenly found ourselves on a pink marked trap-line and had to retrace a few metres to pick up the yellow line heading down into Saddle Creek. Here we parted ways with some of the Nelson TC members who were taking a slightly longer route.

Our track crossed the creek a couple of times and then followed the true right side down to Flora Stream. Depending on how waterproof your boots were it was wet feet for some, crossing the stream. We were soon on the Flora Track and 40 minutes later at the Flora Hut where we stopped for afternoon tea. We were back to the cars before 5pm and surprised to meet up with more of the Nelson group – those who had taken a shorter trip and had not attempted to climb Mt Hodder. We all found it a very pleasant day and enjoyed getting off-track in perfect weather and with great views along the way.

On this trip were Marie, Maria, Rob, Robert, Jeannie, Chris, Jo, Julian and David, together with visitors Julie, Anne and Grant.