An 8-hour day at time and a half 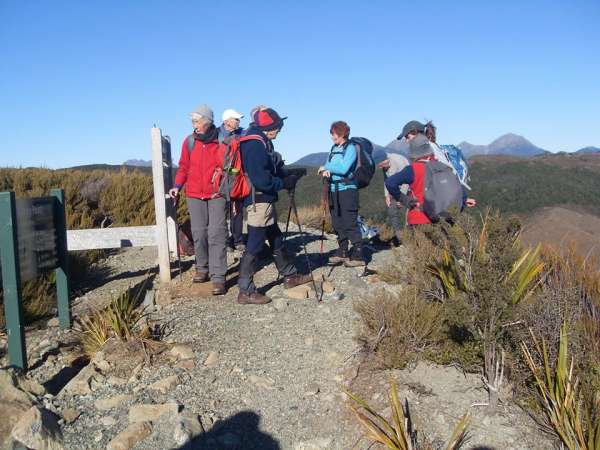 Eleven people including four visitors turned up on a chilly but fine autumn day. The start of the track was just before the Brook Motor Camp. We only had two hills to deal with, unfortunately the first one was right at the start. After meandering in the bush for a bit, out we came into the open to follow the predator-proof fence to the junction of the Dun Mountain Trail. It’s reasonably steep and kept everyone honest and I think the fence is pretty impressive and will last the distance. It was another hour before morning tea at Third House but what a spot it was. Most took the opportunity to sit on the picnic table in the sunshine. It was another 20 minutes along the track to the turnoff at Junction Saddle, which was the second climb and would take us to Wooded Peak. It starts steadily enough but soon we were clambering over roots and rocks and taking it steady. There are a couple of good views before the top and good opportunity for photos. The top was reached shortly after noon, at 1111 meters, it was cold and no view, there’s a pole sticking out of some rocks and a star on a tree and enough room to sit down for lunch.

Next was the climb down, at times you had to be careful and we all kept together, 25 minutes later the track opens up, with stunning views. All the hard work had paid off. Mt Owen and Mt Arthur stood out with snow on the tops, also Rabbit Island and the coast. So a pleasant journey down to Windy Point. It was notable that there was not much wind about. A right turn onto the Dun Mountain Trail and the track still in sunshine for 20 minutes. At last we came across some mountain bikers and entering the bush again there was more conversation especially from visitors Di and Grant, while big fellas Pete and Chris were in front clearing the track a bit. A quick afternoon tea to catch the last of the sun’s rays at Third House and then we retraced our steps back to the cars before 4.30pm. The group were all team players and made my job easier.

Those on the tramp were: David, Donell, Lesley, Val, Chris, Jo, Julian and visitors Di, Pete, Ian and Grant.