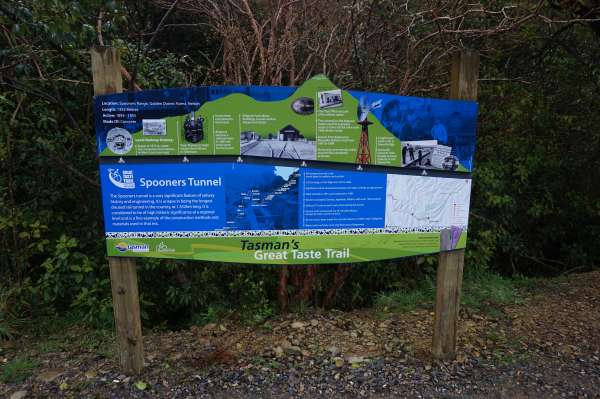 David, Alison, Julian, Lily, Lesley, Linda, Marie, Marian, Jocelyn and Jo took advantage of the stunning weather and signed up for this winter stroll through the Spooners Tunnel.  We met in the carpark opposite the Belgrove Hotel at the civilised hour of 9.30am. We had just crossed the main road when one member of the party decided that the twinge in her knee would prevent her from keeping up with the rest of the party so decided to drive to the far end of the tunnel and walk through the tunnel to meet us.

Nine of us walked the six or so kilometre cycle track from Belgrove through pastoral countryside up to the tunnel, making sure we found a nice sunny area for the mandatory morning tea stop on the way.  Our tenth member was waiting for us at the tunnel entrance. Here we donned an extra layer to cope with the cool temperatures inside the tunnel and made sure our head torches were activated. Hand-built in 1893, the 1.35km Spooners Tunnel is NZ’s longest decommissioned rail tunnel and is the fifth longest tunnel in the world open to cycling and walking. Train services stopped in 1955. Soot from the steam trains is still visible on the tunnel’s brick walls.

Once we reached the car park at the southern end of the tunnel two members of the party decided to call it a day. The rest of us walked on another ten minutes seeking out a sunny spot for lunch. The two hour trip back to our cars via the same route was equally pleasant.