The three D’s did the double P’s 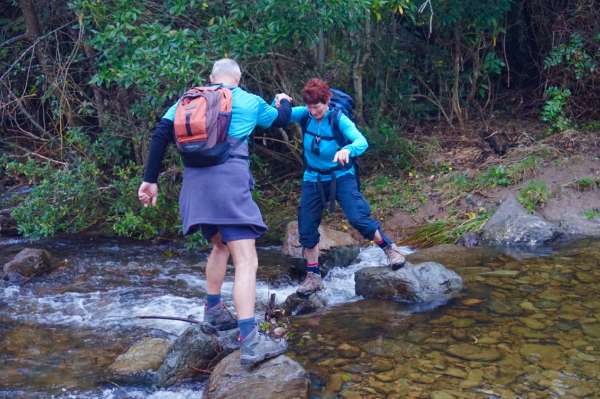 You got that right. Di, Donell and David did Picton Pastures on a pleasant winter’s day. Here’s how it panned out: arriving at 3pm on Saturday afternoon we ambled along the Picton waterfront and streets taking in the flavour of this lovely town, sun shining and everyone relaxing. At around 4.15pm we settled in at my friend’s place, a cuppa and a chat, then around 7pm a shared meal, the fire roaring and the final Lions rugby test.

A leisurely start at 9am on Sunday, walking right from the door, 200 metres down the road to the start of the Tirohanga Track. It was nippy and a little overcast but we were into the hill and 40 minutes later a lookout over the Picton town, waterfront and hills beyond. Continuing down to Essons Valley the group encountered three llamas in a paddock eye-balling us, very photogenic they were, as they got close to the fence we all took photos, especially Di who was in her element. Moving on and a track to Barns Dam, nice woodland, lush nature forest and a variety of tree species. Morning tea was had on the pipes and it rained a little. No matter, soon we were at a waterfall and the bottom of the dam. This and the Humphrey’s Dam is the main supply of water to Picton. Up the steps to the top of the dam but alas the gate was locked, so we could go no further. Donell was proud of herself for reaching the gate.

So it was back out the track with some street walking, parks, the waterfront (the rain stopped), and to the Bob’s Bay Track. An eyeful of views already and the ferry going out, it was good to see some families out on the track. After 25 minutes we came to a side track to Bob’s Bay and lunch was had at 12.30pm. A seat was provided and no one else around. Back up the track to the road, then to join the Snout Track, this one was mostly flat, and every now and then it opens up to great views of the Sounds and Kaipupu Wildlife Sanctuary.

In no time at all we reached the lookout point, where more photos were taken, there is a seat and a loo; one could go further to the end but it’s mostly in bush and unless you’re a purest not worth the extra hour (believe me I know). Back the way we came, then a side trail to an inland track which seems more urban. We passed some nice homes on the way to Endeavour Park and Victoria Domain, the sun was coming out, but I had one more sharp and nasty hill to negotiate to the road and a lookout point. No ferry coming in, no matter a short road bash to join one last track down to the waterfront and ending back at my friend’s place at 3.45pm. It was a pleasure to tramp with two lovely ladies, we had some laughs, probably walked over 10km and came to the conclusion that there’s more to Picton than meets the eye.