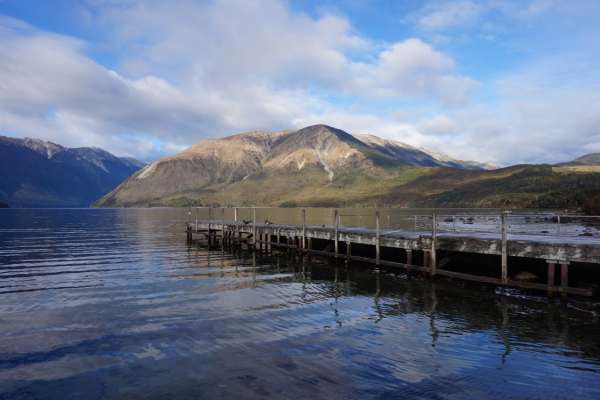 A party of nine trampers travelled to West Bay Lake Rotoiti on a mostly cloudy day. Firstly we headed up the track to Rotoiti Lodge then veered up Black Hill, only taking 30 minutes to reach the summit, 126m above lake level. We were amazed to be told by Julian that Black Hill is actually a volcanic rock but was also shaped by glacial ice flowing over it. It seems to be a common misconception that Black Hill is glacial moraine.

We descended the steeper northern side of the hill and crossed SH63 to the Teetotal Flats. We were surprised to see that the ice skating pond was well frozen and in good use by a dog and several people playing on it. But we were not tempted to try it out, and carried on and climbed steadily up the 2.5km Duck Down Track to a ridgetop in the bush. The Teetotal Trails are shared-use tracks and we were reassured of this by signage stating that trampers are welcome (but may need to give way to bikers). From the ridgetop we descended the 1.5km Rocky Horror Track, a rough stony trail that dropped more steeply back down to the flats. The peace was being rudely disturbed by a couple of shooters at the nearby rifle range doing target practise. We cut through the flats and re-crossed SH63 to the Buller Bridge to find the start of the Anglers Walk. This one hour track followed the northern bank of the Buller River to the lake outlet where we returned to West Bay. A few afternoon showers did not dampen our keenness, and had stopped by the time we finished the 4¾ hour journey.

This completed an ideal circuit for mid-winter and with at least nine different trails in the Teetotal area there is plenty of opportunity for further exploration. The party was Julian, Robert, Donell, Dale, Linda, Colin, Diane and newcomers Charles and Marianne.