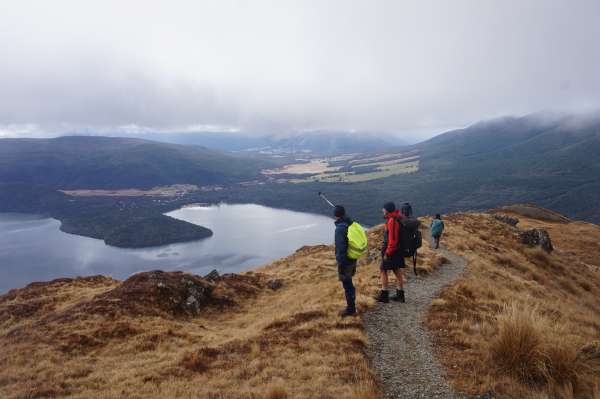 The weather didn’t look very promising with rain when we left home but it was dry by the time we reached the meeting place in Richmond. Twelve keen trampers in three cars arrived at the Mt Robert car park at 8:30am and we were on our way up the Pinchgut Track at 8:45am.

The track has been improved over the last couple of years which allowed us to make very good and timely progress to the shelter before some rain and the 10am gongs by Rob. The shelter looked like it has had a recent makeover and was a comfortable stop for morning tea. Then we trekked on in light rain and mist until we reached the Bushline Hut at about 11am which was a welcome shelter and a good place for an early lunch. After a group photo in front of the hut we descended down Paddy’s Track and luck was on our side when the clag cleared to produce stunning views of Rotoiti and surrounding landscape. The carpark was reached at about 1pm which made it a 4¼ hour circuit which is thanks to the track improvements instead of the recommended 5 hours.

With time in hand we headed off to the DOC visitor centre for a look-see, for those who hadn’t been there before. We saw a very interesting documentary about the life cycle of the lake’s longfin tuna (eel) after which we headed down to the lakeside to see those amazing creatures in the flesh and in abundance under and around the jetty. Our day ended with hot drinks and social chitchat at the Alpine Lodge.