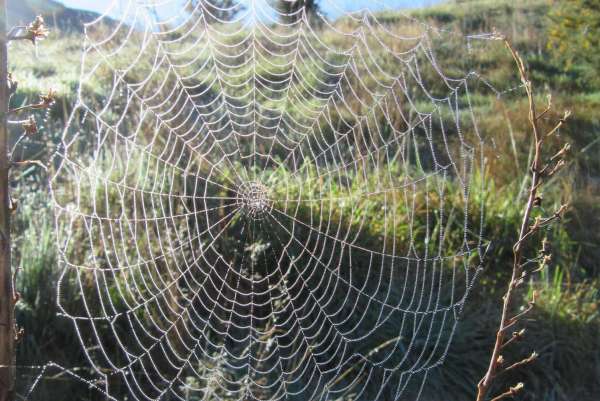 There we were on the Saturday night, Jeff Lukey’s eight Waimea Tramping Club house guests, relaxing in his warm open plan lounge heated from the genuine wood stove in the kitchen.  We’d dined in style on a succulent, shared meal around the authentic wooden dining table which had been lovingly sanded and polished by Maria on an earlier visit. Afterwards Rob, Chris and I played the visual perception card game ‘Set’ which Chris impressively clicked onto just like that, while Jo was happily engrossed in her crossword and the others casually flipped their way through Jeff’s impressive collection of Wilderness magazines.

Was this meant to be a tramping trip or just a social club outing to the Marlborough Sounds? We did actually do some tramping during the days, so it was both. Before I tell you about the tramping though I’d like to send a big thank you out to Jeff for his hospitality, generosity, local knowledge and track building and maintenance abilities all of which we partook of. Jeff we so appreciate you!

Earlier on the Saturday after arriving and devouring scones for morning tea, we climbed Mt Parkinson which is the name Jeff has given to the previously unnamed peak behind his property. The property itself is on the shore of Pelorus Sound at Wakaretu Bay which is about 20km from Havelock opposite Mt Cawte and Cullensville areas on the other side of the Sound where the club sometimes has day trips to. Jeff, on his own and at times with help from friends constructed the track up, across and down Mt Parkinson including the bridges near the bottom. We walked up Lukey’s track to get to the top of Mt Parkinson where we admired the superb views over Pelorus Sound, Havelock and along the Pelorus River and then took the continuation of his track which allowed us to loop back down to Wakaretu Bay. We took 5 hours including a 30 minute lunch stop. It was sunny and clear along the ridge although by the time we returned to the bach the sky had become white again.

On the Sunday we drove a few more kilometres to the start of the Nydia Track. The Nydia Track itself goes from Kaiuma Bay to Duncan Bay. It's a ten hour trip so two easy days. However it does require advance planning transport-wise as the two ends are two to three hours apart and that’s driving time. For those of us who’d done the whole track this was a pleasant reminder of its beauty as partly coastal track and partly hill. For the others it was a taster for a pleasant trip which is both beautiful and close to home as well as being largely unknown. We walked up to Kaiuma Saddle and looked down to Nydia Bay where track descends to and meanders along beside before going up and over Nydia Saddle and out to Duncan Bay.

We took 2½ hours to get to Kaiuma Saddle, had an early lunch, returning with time to drive further to Kaiuma Bay where a developer is taking his chance with the costs of reclamation to build a marina and has subdivided 30 or so sections he’d like to sell. Then it was back to Jeff’s for a leisurely afternoon tea before driving back to Nelson where we arrived at 5pm.

Thanks Maria and Rob for organising the weekend using Jeff Lukey’s as a base camp. The other club members who came were Jo, Chris, Pete, Di, Donell and myself, Alison.