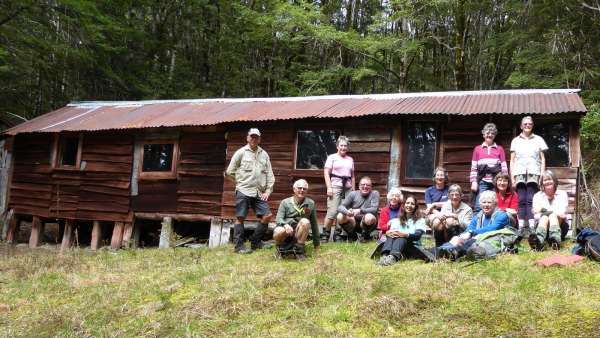 With it being the day after the election and the first day of changing to daylight saving the meeting time was delayed to 8.30am. Fortunately all thirteen club members were on time and we were away promptly. Knowing there is little difference in distance between driving via St Arnaud or over the Spooners Saddle we chose to drive there via St Arnaud and return over Spooners. The track to this historic hut begins at the carpark at the Louis Creek picnic area, about seven kilometres up the Howard Valley Road, 16km north-west of St Arnaud.

After crossing Louis Creek, where quite a few of the group ended up with damp feet, we followed Monument Road, a four wheel drive track, for about half an hour up to the Miners’ Memorial, where we enjoyed our morning tea break. From here it was about an hour and a half of steady climbing through regenerating native bush and over miner’s tailings to Booth’s Cottage, situated in a small clearing above Louis Creek.

This hut was built in 1933, during the depression, by Sid Booth and Ray Clarke while on the Government Gold Prospecting Subsidy Scheme. It was the home for Sid and Eva and son Teddy Booth for over ten years. The long rectangular building has four rooms, mainly built of lapped beech slab over pole beech framing with a corrugated iron roof. Bulbs and other plantings from the family’s garden and a variety of artefacts including old footwear and bottles are visible around the clearing.  Remnants of the telephone line connected to the hut in the late 1940’s are visible along the track.

After lunch at the hut most of the party continued uphill through very pleasant beech forest where the forest floor is softened by an abundance of bright green mosses. A 45 minute climb took us onto the Porika four wheel drive road. After a short walk along the road and up a pylon track we reached the pylons and were able to get views down the valley to the north, and south towards the mountains.  With a cool wind blowing in this exposed area we didn’t linger long. We retraced our footsteps back to the cottage and then down to the cars picking up those who had enjoyed a long lunch at the cottage on the way. A couple of short side trips confirmed that the marked DOC tracks were providing access to the river for recreational gold panning which is permitted in this area.