A circuit with variety 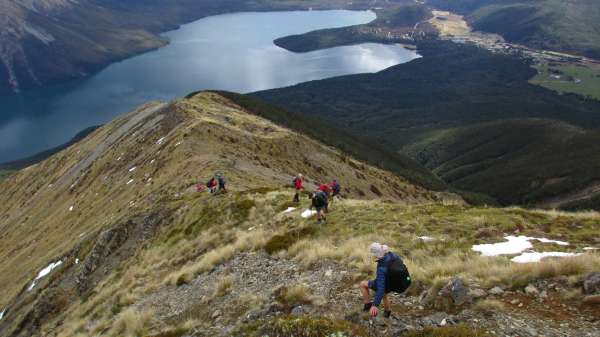 Weather forecasts during the week had been marginal, but on Saturday morning, there was neither extensive cloud nor snow on our ridge, so plan A began. Fifteen trampers left Kerr Bay soon after 9.30am. We were off to a good start with no one charging along to Lake Head! As usual, it was a pleasant climb up through the bush to Parachute Rocks though the track was fairly wet. However, we found a suitable spot for the required morning tea rest. We made our way up onto and along the ridge where it was considerably cooler. After a short distance there was a sheltered spot for lunch. We were fortunate there were only pockets of snow though a more extensive cover on the SE side. Despite showers in several directions, there was only a light breeze. Our “17 storey restaurant” provided extensive views. But not all were comfortable walking along the rocky ridge and there was more of the same to come. Consequently, Alison our leader, very kindly offered to split the group and return the way we had come. The remaining eleven continued along the ridge over the high point 1787m and until we needed to turn off down our spur. This was an easy descent on shingle and tussock.

The trapping line is better marked than in the past but the steep slipperiness hasn’t changed! Did anyone at all manage not to take a slide? When the sun shone, the bush and mosses were beautiful. Near the bottom, I couldn’t find the waterfall which I suspect was scoured out as much of the creek was. Such is the power of nature. The last part was following the creek bed, but we managed to keep dry feet. Down at the lake edge, we had a short break. The lake was perfectly calm and peaceful. A couple of ducks entertained us, apparently demonstrating a lack of matrimonial harmony? After about half an hour easy but muddy walk around the lake shore, we were back where we began 7¼ hours earlier.  With an acceptable 0% tramper loss, we were glad to get in the cars as the rain began and sandflies declared dinner time.