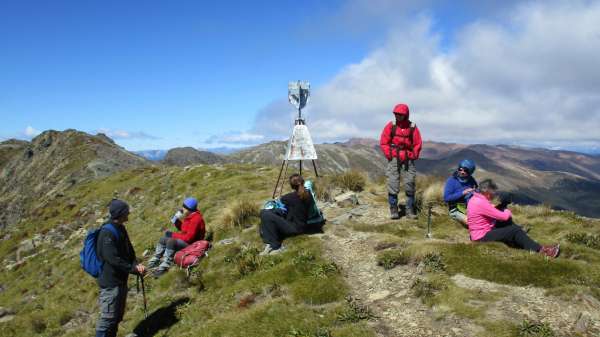 A fine but breezy day greeted eleven trampers attempting an ascent of Ben Nevis. We travelled up the Wairoa Gorge Road then the Left Branch, until a sign indicated a turnoff up forestry roads with the correct roads well indicated with orange triangle markers on poles at intersections. We parked 15 minutes walk before the normal carpark, rather than trying to attempt the steeper parts of the road. Then it was a good ten minute struggle up a very steep bulldozer track that leads to the track proper, climbing a pleasant bush ridgeline. Soon we reached the bushline at the start of Gibbs Spur where we paused for a break with views out to Tasman Bay. Once we started up the ridge we had views all the way to the summit. The ridge undulates and narrows with a few scrambly rocky sections and still with patches of bush to pass through. From the final bushline it was a more straightforward 30 minute clamber up slopes of tussock and rock to the summit trig at 1619m taking us 3 hours 20 minutes.

We sheltered from the cool wind, enjoying our lunch and the very rewarding views of the nearby Richmond Ranges, the Waimea Plains and Tasman Bay. Because we arrived a little earlier than planned most of the group were keen to carry on to the next high point at 1642m, taking a further ten minutes. It was a regulation return at a quicker pace to the cars and all were happy with our efforts.