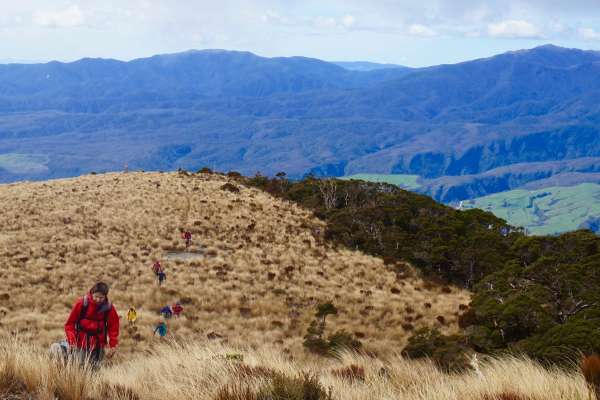 Twelve keen trampers met in Collingwood at 8am and headed off in four cars to the track start, which was 28km from Collingwood inland along the Aorere River. Putting on our boots we looked to Mt Stevens’ top which unfortunately was covered in a thick mist. Oh well we can’t be lucky with the weather all the time and we’re here now. At least we will get a good work out! 8.40 saw us on our way on a fairly easy 4WD track before we got onto the tramping track.

Starting at 100m altitude we had 1100m height to gain. We climbed steadily through beautiful native bush that gradually changed as we got higher up. The DOC guideline was correct: it was steep in places. Our morning tea break was at an altitude of 640m, nearly halfway up the climb. Just before we reached the bushline we met two slightly disappointed trampers on their way down, who said the summit was overcast. However, lucky us! The weather gods were with us and as on cue the mist lifted just as we came out of the bush to provide stunning views over Golden Bay, Farewell Spit and across the Aorere Valley towards the Haupiri Range. Nine of us continued to the true summit at 1213m which provided a 360 degree view, including the Whanganui Inlet and the West Coast. WOW!!  What better venue for lunch?

On the way back we were greeted by three colourful kea who were flying above us. Before descending, a small party of five people quickly checked out the trig at a nearby summit which can easily be mistaken for Mt Stevens and shows on some maps as “Mt Stevens 2”. We returned the same way and everyone was back at the carpark around 4pm, giving us a total trip time of 7 hours 20 minutes. Those on the tramp were: Esther, Eric, Arif, Joy, Diane, Peter, Marian W, Mike, David S, Mary, Don and Nicola.