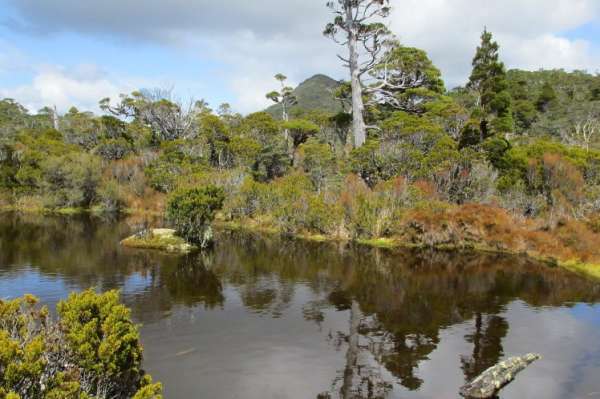 14 trampers met on a sunny morning at Paru Paru Road carpark at 7.30am from where we carpooled to the Maitai Dam. The first part of the walk was up a forestry road, bare from recent logging, until we reached the signposted track to the Rush Pool and Dew Lakes. The climb to Dew Lakes was steady, through native bush and some clearings as part of the mineral belt. The clearings quickly gave us good views over the bay and the surrounding mountains and provided a good place for morning tea. Dew Lakes were reached not long after our morning break, and most of us took the time to explore the variety of lakes (ponds) which were teaming with tadpoles, the views from the mineral clearings east towards the Marlborough Sounds were stunning (perhaps a place to go back and pitch a tent for a night?).

Leaving Dew Lakes we proceeded up through picturesque native forest, along the Bryant Range over Maungatapu and a steep drop to a rocky clearing which was a good place to stop for a regroup and lunch. From lunch the track meandered up and down through bush and clearings until the Maungatapu Saddle was reached. Light rain at the saddle saw the raincoats come out but the rain was short lived and the coats quickly went back in the packs. Down the Maungatapu Road and we were back at the carpark by 3.45pm which as a total time of 7 hours 45 minutes and a distance of about 17km. The only other person we saw all day on the track was a motorcyclist on the Maungatapu Road.