Cut the mustard 2 (let me show you a few tricks) 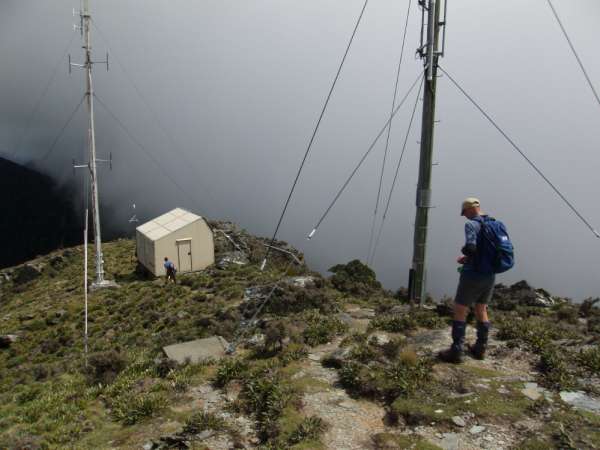 It is not very often you get to climb two peaks in one day, so a good challenge was on the cards for the four of us. Meeting on the Saturday evening around 6pm at the end of Onamalutu Road on the DOC campsite, we were surprised on how big it was, a lovely spot and very quiet, with just three other campervans to share the park with. Tents up, our party had dinner then pondered the possibilities of future trips in the Mt Richmond Forest Park. From here it was only a 15 minute drive on a gravel road to the start of the track. It was an 8.30am start and we took the Riley side first as most trampers go this way. The stream crossing was done with no problems and then the climbing starts. Steep bush ridges, on a good dry track. Having Chris in your party is an advantage - if I was asked what bird sounds were made or the name of a certain plant, I would just point to him and he would solve it. Morning tea was had at 10am (union rules), a flask of coffee and a muffin can do wonders for your energy. After slogging for about an hour we came across open tops, but there was more cloud about than I would have liked. Never mind, onwards and upwards at a steady pace and photos taken. Then suddenly two goats appeared ten metres in front, eye-balling us. No side moved for a few minutes and just as Esther was going to take a photo, they darted to the side and were gone. By around 11.45 the group reached the summit of Mt Riley and the sun came out briefly. There were great views of the Kaituna Valley and the Wairau Plains, and plenty of room on the top, so we roamed around a bit.

With group photos taken, it was downwards into the bush to reach Mt Sunday Bivvy and have lunch. It’s a very cosy two person shelter and Eric was most impressed, he’s going to come back, tramp the other way and stay the night there. Checking out the hut book, it is used on the occasion and there are a couple of spots for tents. Upwards again and 15 minutes later the summit of Mt Sunday was reached with more great views, but the cloud was rolling in and it started to get cool. It’s more of an open rocky section and one has to be cautious. We dropped down into the bush and this bit was a little tricky as there are steep drops and it’s a little slippery. The downhill section is hard on the knees and most of the group had walking poles, but we all stayed on the same pace. Esther spotted a bird’s egg, I heard a robin and Chris spied a good place for afternoon tea. This was needed as we still had a fair bit to go, but time went by quickly and then with flat green paddocks and streams running, our group was nearing the cars and by a little after 4pm we had finished. A great effort by the group, they definitely “Cut the Mustard”. The tricks to a great trip are: camp nearby for a good start, stretching exercises before you embark, and a treat at the end for your participants (Christmas cake). Those on the trip were: David W, Eric, Esther and Chris.