A Country Calendar on a Saturday 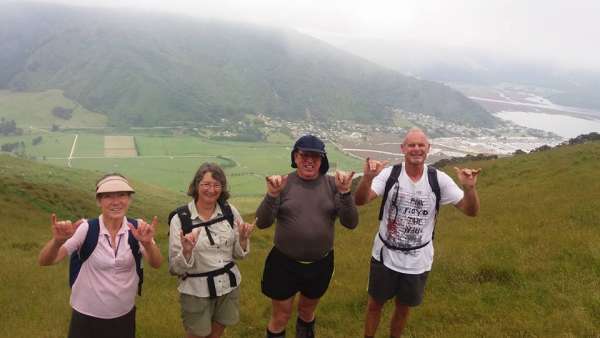 Well let me just say it was more than a ramble. The group met 8am at Paru Paru Rd to get to the registration before the 10am deadline. On arriving around 9.40am, things were very well organised with signposting to parking and arrows pointing to the sign in. You get a number and write it on your hand, that way they track you at the finish and tick you off - it’s old fashioned but effective. You get a map but don’t really need it as the red markers are so clear. This was a fundraiser walk for the Pelorus Community Preschool ($20). Walkers could start between 8am and 10am. At the finish there was a sausage sizzle, lemonade and with a bouncy castle for the kiddies. So our group started around 9.50 and we were going to take our time on this very picturesque farmland. There were runners, mountain bikers, fast walkers and generally nice people about. This year the owners decided to make a 12km loop as previously it had been two tracks. Early on we were entertained by a biker doing a few jumps on an angle in the hills - he just couldn’t resist. Basically the track winds up and down, through the valley and along ridges, I tell you those hills gave us a good workout. It’s mostly open but on occasion the track goes into beech forest and native bush. Although a misty day there were good views of Kaituna Valley, Pelorus Sound and Linkwater.

Our team stopped for lunch about midday on some nice logs, photos were taken and I showed everyone the cool hand signals one should use. A thumbs up doesn’t do the trick. Reaching the highest point it would have been at about 400m, through some more bush on the downward tread and once it opened up again the sun was trying to come out and I reckon this was the most scenic part of the day with Havelock town and harbour in the background. So four hours later we finished, not quite the last, but things at the back were winding down. Not so many on the bouncy castle, but a couple of us grabbed a sausage and a coffee. It was a great opportunity to walk through an area the public would not normally get to and appreciate how much work goes into running a farm, the sheep we saw looked in good fettle. By 2.20pm we headed our separate ways. Those out today were: David W, Julian, Marian W and Beverley.