Long and hot but well-appreciated 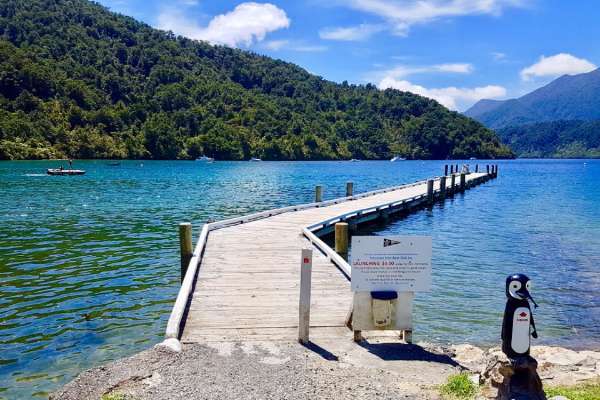 It was a fine, warm weekend morning full of promise when the group met at Paru Paru Rd at 8am.  Some of us were oh so keen to get out tramping again after so many days of hot and very wet weather putting pay to carefully laid tramping plans. This trip had been postponed from a week earlier and only went ahead this day as there was too much water in the river from the recent heavy rain for Chris and Jo to lead the trip they’d planned to the Pearse Resurgence.

It was a long 85km drive from Nelson to Elaine Bay. The sea views towards the bay are picture postcard stunning though. We left the cars at 10am to walk the 9km around the pleasant clay track in and out of trees which gave us some measure of shade. A number of the party said they still felt hot and drippy because it was such a humid day. We came across cyclists on the track who warned us that we’d come to a fallen tree. Soon there was a small trunk that had fallen across the track. I thought “surely they can’t mean this, it's nothing really.” Ten minutes later, I reckon we were all glad to be trampers rather than cyclists. While we managed the down and around process, it would have been very difficult trying to pass bikes down low, around the spread-eagled trunk of a much larger tree, then back up onto the track again, while keeping oneself upright. We were all at Penzance by 12.45pm. Most of the party stopped just long enough to change into their togs before heading straight for the water. The tide was high so it was a real treat.

After lunch under the big shady tree by the beach, we started back along the track at 1.45pm. Everyone was back at the cars by 4pm and after a short lounge about and chat we were on the road again, back to Rai Valley and from there along SH6 to Nelson where we arrived by 6pm. It was a long day, a hot day and a well appreciated day.