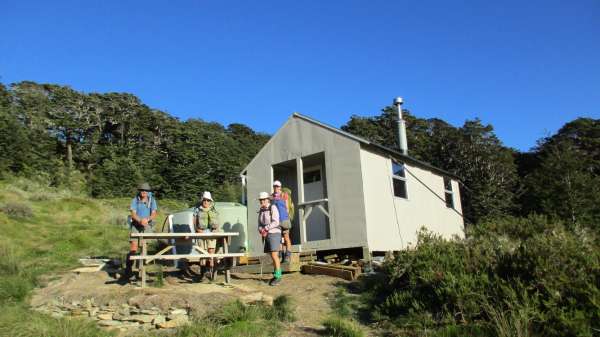 Ten trampers in two carloads travelled 31km along the Northbank Road to the Te Rou Road turnoff where we transferred to the other vehicle so we could travel home in our own vehicle. The Toyota ute headed 3km up to the Timms Creek carpark at the end of Te Rou Road on the Mt Fell side. The high clearance Range Rover was needed to cross the ford in Top Valley and then travelled a further 4km up Jackson Creek Road to the carpark on the Mt Richmond side.

On the Mt Fell side the group of five tramped beside Timms Creek for two hours then crossed the left branch of the creek. It was a tough but steady, continuous climb of 1000m up through the bush. Suddenly the track veered right on a sidle of 1½ hours through the bush towards the hut. A few small creeks provided refreshing relief on a warm day. Some views were obtained through the bushline up the slopes of Mt Fell before we broke out into a large clearing to the 6-bunk Mt Fell Hut after 6½ hours. The hut was relocated 250m from its previous site in 2017 due to the threat of a landslip. The hut has also been refurbished with a new wood burner and two new benches and a new water tank. The setting is splendid with grand views north east along the Richmond Range. The other group had a 4½ hour day from the carpark in Top Valley to Richmond Saddle Hut.

Sunday was fine and sunny as we headed off along the track passing the old hut site after five minutes in a tiny clearing with a precipitous slope immediately below it, making us glad that the hut had been shifted. From here the track turned uphill and emerged from the bush and we soon reached a signposted junction on a ridgeline, taking us 25 minutes, where we dropped our packs. It was quite an easy jaunt along the ridgeline to Mt Fell summit at 1602m about one hour from the hut. While enjoying the vistas of the Richmond Range we could just make out some tiny figures of the other group approaching Mt Richmond on the far ridgeline. We quickly descended to the junction then climbed the ridgeline towards Johnson Peak and traversed under many impressive rugged rock outcrops. As we steadily climbed up the tussock slopes our thoughts were of the aircraft that crashed near here in 1942, killing all five people on board. As we reached the top of Johnson Peak ridgeline we met the other group where we chatted for a time before continuing on our way.

After crossing a flat saddle we started a steep climb of 45 minutes up rocky scree slopes to the Mt Richmond summit at 1760m. We enjoyed our lunch with the superb views of the Richmond Ranges and southern Marlborough in every direction. Strangely, hordes of flies were flitting around on the rocks on the summit ridgeline, perhaps the result of the recent hot weather. We descended the summit ridge, meeting up with several Marlborough TC members on a tough day trip. Veering off the ridge, the route crossed a field of boulders then a very steep descent on loose scree and rocks.

We entered the bush and soon reached the 8-bunk Richmond Saddle Hut in a grassy clearing after a total day of 6½ hours. The rest of the afternoon was spent relaxing outside in the welcome shade of the nearby trees. The other group traversed across to Mt Fell Hut in seven hours, staying the night.

Monday was again fine but with a complete layer of cloud in the valleys 300m below us. After a 40 minute sidle through the bush it was a steady descent on a good ridge track. We emerged from the bush at the carpark in only 2¾ hours which was quicker than we had all expected. We all had been previously warned by other trampers about a flat tyre on our vehicle but the spare was soon in place, courtesy of the two men in the group. After driving down the forestry road we carefully negotiated the ford across Top Valley Stream. The other group dropped down from Mt Fell Hut to Timms Creek taking six hours with an enjoyable swim in the creek on the way.

Only four other trampers were at the two huts in total over both nights, unusual for a fine summer weekend. Overall a fabulous trip to the top of the south’s iconic peak and great to complete a successful crossover.