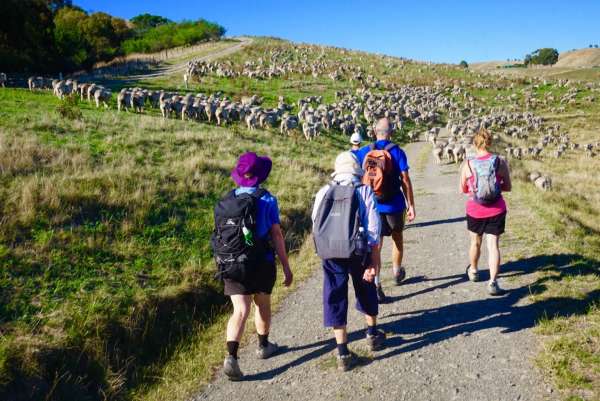 Medium sweet could be used to describe a popular wine, or may be used to describe the leader, but definitely used to sum up this weekend. Five of us left Nelson around 11am Saturday morning to have lunch in Havelock around 12.20pm. We chose a nice rounded table near the church overlooking the harbour. With flasks and tasty morsels out, a leisurely lunch was had and then a drive to Ngakuta Bay at the start of the Link Pathway. This walkway system is almost complete. It’s a series of tracks off Queen Charlotte Drive, to link Havelock and Picton, mainly designed for mountain bikers, but walkers will enjoy this too. Our group did the section to a viewpoint of Shakespeare Bay and then back, taking nearly three hours. There were great views over Queen Charlotte Sound and the isolated baches spread along the coast. On this warm day we came across some mountain bikers and walkers, this was the ideal warmup for Sunday. The leader has got connections and we able to stay at his friend’s five bedroom house just up from the main street in Picton. There was plenty of room for everyone, the party settled in, then Eric and Esther joined us in time for dinner. A pleasant meal was enjoyed at the RSA.

The next day it was a 25 minute drive to the Wither Hills Farm Park just out of Blenheim. This 65 hectare area offers a wide range of tracks for all levels, mainly mountain bike trails but some walking tracks thrown in. We started and finished at the carpark in Redwood Street. First the Lower Farm Track which was mostly flat, with a few runners and then sheep, lots of sheep heading towards us, blocking our way. We walked slowly towards them, but no one backed down, then one sheep runs amuck the other way and the rest followed. Alison thought that was amusing. We realised a few minutes later the farmer on his quad bike was heading them our way and we spoiled the party, probably making him 20 minutes behind schedule. Along the Taylor River Trail, there was a stream crossing then a road bash to the Stockyard Track. This was mountain bike territory now, but it was noticeable how clearly marked the tracks were. Next the Short Loop Track and the start of two hills. Val was leading the charge to the Rotary Lookout where Di was taking lots of photos, ambling along to Quail Junction, where there are toilets and water. This is all open farmland and on this hot day the sunblock was needed and with hats on. Next was the hardest hill of the day - the Intersect Track - sharp and nasty, but the group went at their own pace. After catching our breath it was the Taylor View Track, and ten minutes later we found a spot in the shade for lunch.

Next was the Split Apple Peak Track which is both a biking and walking track, with some up and downs, but a good sweat was had. We came to a junction and our goal Mt Vernon. It’s only 422m high but it feels higher and has 360° views of Blenheim and the Wairau Plains. Although it was a little windy our party stayed there for quite a while. From there it was all downhill on the Mt Vernon Track past the airstrip and fertiliser bin to the carpark at 3.10pm. But Alison was sitting in the shade reading a book and had been there for over an hour – how was this possible you may ask? You will have to hear it from her. So in conclusion a six hour day, a good workout, great company and it’s worth coming back for the mountain biking.

As Sweet Pea would say:

“The accom was good, we would all prevail

And no one had to top-and-tail.”