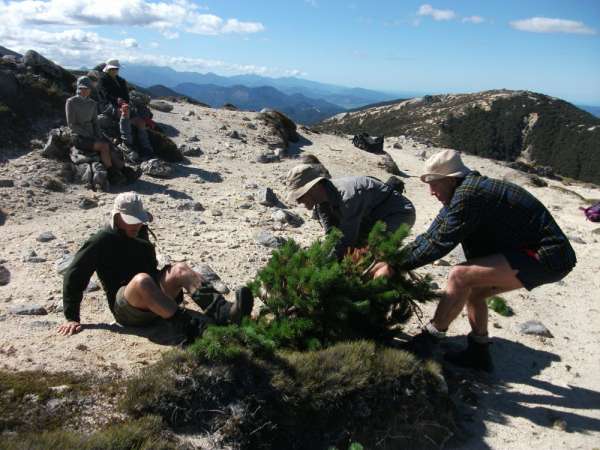 The planned destination was John Reid Hut, but with high river levels and no high four wheel drive vehicles to get us over the Dart Ford, and with a fine weekend ahead of us, we decided to do a different tramp. Which was going up to the Hope Range and tenting. We set off from an old lime works road, on private property, and followed up a route to emerge from the bush at Conical Hill. Immediately we discovered the wee gentian that is unique to granite country. They were quite prevalent on patches of granite sand and we trod carefully so as not to crush these cute wee specimens. Our tents were set up near a water source some 15 minutes south along the range. After a short rest we took our daypacks and continued to wander along to the south. Wilding pines have reached this area in small numbers and the men in the group took up the challenge of pulling out most of these. Once we reached the southernmost point of this section of the Hope Range we returned back to our tents. This was about a two hour return trip. The evening was a bit breezy but we were able to take shelter in a rock cirque to cook tea and chat. It was early to bed that night in the quiet surrounds of granite.

We woke to a calm sunny morning, so lingered while tents dried out a bit and people enjoyed the views and wonder of the day in this environment. Conical Hill was a good vantage point for morning tea before we set off back into the bush for our descent back to the cars. We did find a small mistletoe that we knew to be in the vicinity. It looked a bit bedraggled but there was a fresh wee one nearby so that was encouraging that it would survive. This trip took about four hours from vehicles to Conical Hill and about three hours back down.