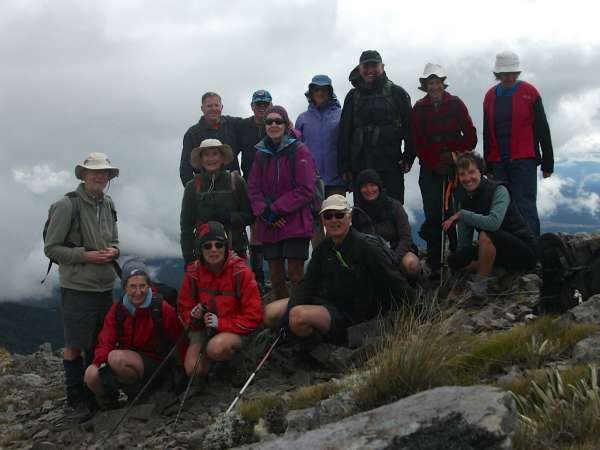 The aim of this trip was to spend a couple of hours on the glorious tops of the Gordon Range admiring the numerous peaks which I for one only usually see from inside a commercial aircraft while flying into or out of Nelson. Conveniently the clouds lifted for us to be able to do this with only slight to moderate winds. As well we could look out to sea.

We’d left Richmond at 8am heading toward St Arnaud. We watched for the turnoff to the left in Wai-iti Valley. From there the road was metalled. To those who were first-timers on this trip, the Inwood Lookout car park felt like it was a long way from the highway. Those who had been before were pleasantly surprised at how well the metalled surface has been maintained.

The ascent to North Ridge was slippery in places so we were relieved that the day was dry. The higher we climbed the more slate deposits there were both on and around the track. Maria was delighted and stopped leading from the front so that she could pick and choose specific pieces which appealed to her to take home for a DIY project. We had lunch on the south end of the North Ridge, and while high up, we were still dwarfed by Gordons Knob, slightly south of where we were sitting. We then wandered to the north in order to get the sea views and for Maria to have yet more slate to choose from. Slate and rock hills and mountainsides are even slipperier to go down. With patience, encouragement and good humour everyone managed without any spectacular or catastrophic events on the way. In fact we were in such good condition that many hundreds of small wilding pinus contorta trees became pinus aborta as their trunks were sawn off by Chris with his pruning saw or pulled out at their roots by other party members.

We were away from the cars for six hours which meant we had time for a leisurely afternoon tea stop at Rob and Maria’s where Julian ensured we were treated to fresh figs by picking them straight from the tree. We were also generously plied with home baking and to the delight of our English visitor Rita, Black Boy peaches which she tasted for the first time and greatly enjoyed.