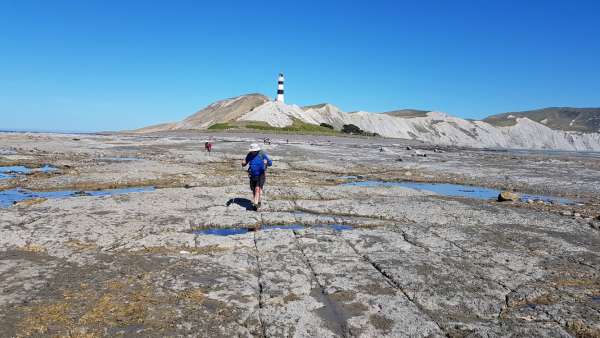 On Good Friday ten members met at Paru Paru road and travelled in three cars to Marfells Beach. From there we walked in perfect weather along the coast to the lighthouse at Cape Campbell. Due to the Kaikoura earthquake the coast has risen and there is now no need to wait for low tide to negotiate along the shore. Unfortunately being Easter weekend we were frequently accompanied by noisy quad bikes taking the local campers along the beach to Cape Campbell for fishing.

An email to the local farmers was very worthwhile and we were able to use toilet facilities near the lighthouse and enjoy lunch nearby in the shade. From the lighthouse a short walk took us onto the pavement-like, rocky shore now protruding out of the sea near the cape. A few seals helped entertain us before our return walk to Marfells Beach.

The drive down to Kaikoura was interesting with all the changes along the coast, the new road and impressive earthquake slips in the hills.

We arrived at the Peketa Camp Ground in time to get dinner and settled in for the night. An enjoyable game of dice finished off the evening.

We drove a short distance to South Bay and from there walked along the cliff tops to Point Kean. We walked past the enclosure where they are establishing a new Hutton’s Shearwater colony and had spectacular views of the changes along the coast. Arriving at Point Kean carpark we found that area very busy with large numbers of tourists. From there we headed back towards South Bay, but along the shoreline avoiding seals hiding amongst the rocks until we found a suitable lunch spot away from the crowds. Again it was generally easy to walk on the flat pavement–like shore often on areas that would have been underwater prior to the earthquake. One member of our group found and photographed a large red octopus in a rock pool, but was unfortunately too far from the rest of the group to share his good fortune. We were back at the cars relatively early in the afternoon having completed a round trip along a spectacular piece of our coastline. We were pleased to be near the shelter of our cabins when a strong wind hit with a change in weather direction to a strong southerly. Later that evening we all enjoyed an evening meal at Donegal House, an Irish pub just out of Kaikoura.

Rather than changing our clocks back, we made a relatively early start and headed up the road to the base of Mt Fyffe. The track follows an old 4WD road steeply up the ridge to the Mt Fyffe Hut. It took us about 2½ hours to get there with a further hour and twenty minutes up to the summit of Mt Fyffe (1605 m).

Mt Fyffe is one of those locations where in the 1960s and 1970s the Forest Service planted pines (mainly mountain pine, Pinus mugo) and green alder (Alnus viridis) to help stabilise the shingle screes. Unfortunately these species are now very dense in patches along the edge of the track. From the top we soaked up spectacular views along the coast and of the nearby mountains before returning the way we came. We were all fairly tired by the time we got back to our camp but very satisfied with the day’s effort.

We parked the cars near Oaro just before the main highway turns inland as it heads south, and walked south along the beach towards Spy Glass Point. The walk follows a rough road near the railway line until you come to a railway tunnel. We followed a very overgrown track past the tunnel heading towards the beach until we reached an old rope providing some assistance down a near vertical cliff to the beach. At this point it was decided that the track wasn’t suitable for our group and we headed back through the blackberry to a morning-tea spot near an old shed, not far from the tunnel. On the way back to the cars with the tide lower, we were able to walk along the beach. It was interesting finding fossils in the rocks and avoiding basking seals which were much more nervous around us than the ones at Kaikoura Peninsula. We enjoyed a sunny lunch spot on the beach close to where, according to a local, an old train had been filled with rocks and pushed into the sea as a way of stabilising the bank. Despite not reaching our intended destination it was a pleasant walk and an interesting drive south of Kaikoura past more slips and road works and one rather badly damaged bach. The long drive home was broken with a welcome coffee stop in Havelock.