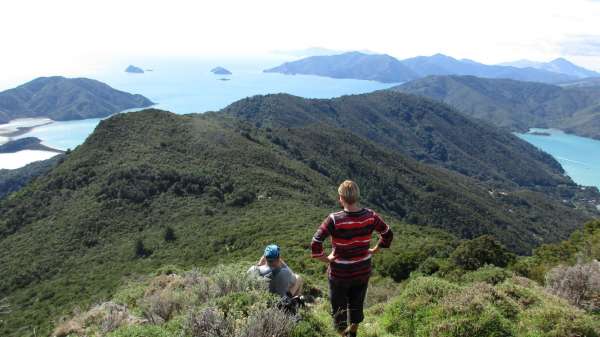 Bringing up the rear, Robert and I speculated about the fluorescent green lines painted across the Goat Hill track. Ahead we could hear chatter and peals of laughter from the nine trampers ahead. Julian joking, I speculated. It was a warm, sunny day, the gradient steady and the rata in bloom. There was a beautiful sea view from the ‘elevenses’ stop then a short walk to the exit point where the road starts its descent to Okiwi Bay.

I’d told everyone that rather than reversing our tracks (as stated on the programme), we’d go down the road to explore a 50ha block of regenerating bush belonging to my friend, Malcolm. Some 20 minutes later we sat outside his shed munching ‘twelveses’ and gazing onto the bay. Then we meandered for an hour up beautifully developed tracks to a delightful hut on the edge of a beech stand. After lunch, another 30 minutes climb, with handy ropes at the scrambly bits, and we looked down from the top (580m). The bays of Croisilles Harbour in the foreground and the ridges of D’Urville Island in the background, bush green and sea sparkling. ‘Can we stay longer?’ asked Donell – and we wished we could.

Back at the hut another track lead us through the beech grove, past the hum of busy wasps. This track led to a rimu stand and into a gully of ponga and nikau before rejoining our original track by the stream. An arc of water sprouting from the tank overflow caught our eye and a stainless steel mug invited us to drink. Clear, cool and delicious.

Waiting at the shed, Malcolm was pleased to hear we had enjoyed the walk and answered our questions gladly. The land, burned then farmed briefly, is now regenerating native. Predators include rats, possums and the occasional stoat. Goats and pigs are problems too. Conditions favour rata and rimu; Malcolm expects these species to dominate in several hundred years. Malcolm’s son, Tom showed us their proposed cottage site and then it was time to walk down the road to the cars, arriving just after 4pm. Special thanks to Malcolm for the opportunity to explore a property reflecting his dedication - and full of delightful surprises.