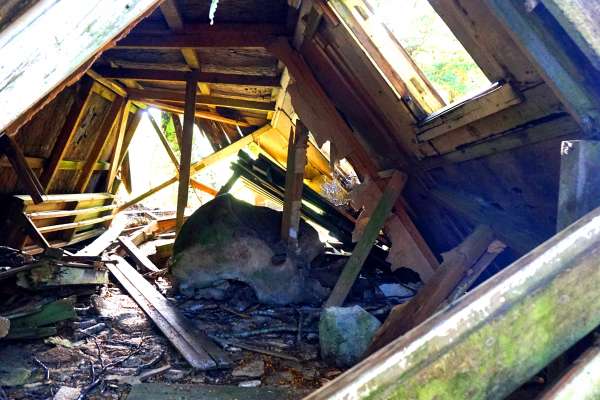 Our group of 14 departed the Takaka Hill Walkway carpark at 9.15am to walk the Big Loop. After a few minutes we detoured to an old dilapidated hut to see the resident mummified cow. A group of heavily laden cavers scooted past us on their way for a training session but we headed up to the TV antennae for a fabulous 360° view, then carried on around the outer circuit. Much of the trail was forest and scrub, with nice expanses of open karst and a few tomos thrown in. This was a circuit of three hours.

After finishing the loop we drove down the Canaan Road, had lunch and at 1.15pm headed to Harwoods Hole. Beautiful beech forest gave way to a scramble at the end of the trail up some large limestone boulders - but you can’t get close enough to the edge to see down the depths of Harwood Hole, NZ’s deepest cave at a whopping 357 metres. A side track to the Gorge Creek Lookout terminated in more jagged limestone boulders, with a view along the gorge and Takaka Valley. A there and back trip of two hours.

We had timed our day to perfection, as we arrived at the Woolshed Cafe with its menagerie of animals just before closing. The day was much enjoyed by four club members: Diane, Marian, Chris, Jo; and ten non-members: Odette, James, Charles, Sally, Declan, Meg, Michelle, Beavan, Poppy (12) and William (9). It was lovely to have the young ones along.