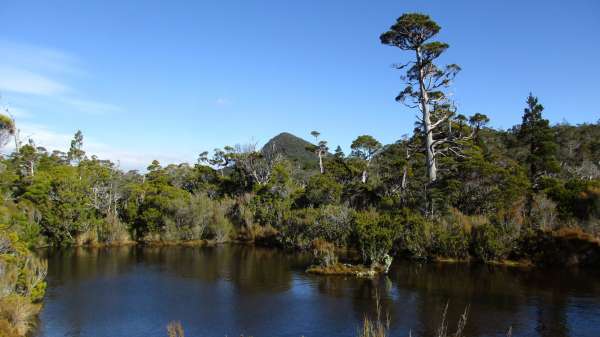 The scheduled trip to Mount Hope was deferred then altered to Dew Lakes due to continuing poor weather in the western ranges. Nine people were still keen to get out so we left from the Maitai Dam carpark at 8.30am in fine weather. The first section has taken on a complete change in appearance due to forest harvesting in recent years, making for a barren landscape but giving good views. We left the forestry roads and stepped onto the more pleasant track proper, climbing slightly at first then soon more steadily, passing through patches of bush alternating with clearer scrubby vegetation. We passed the nearly dried-up Rush Pool and then stopped at the adjacent argillite quarry. Here we looked for a small rough rock shelter that we had been told about. The large rock outcrop immediately beside the quarry proved a disappointment with barely any room for any person to shelter under. But soon Maria discovered the rock shelter just uphill in the bush. The very large rock outcrop covered a fireplace, but not over the two rough individual sleeping platforms, one constructed of branches raised off the ground and the other made of rocks topped off with branches. This was an interesting find for us all.

We continued on the track uphill which became quite rough at times, often in a shallow watercourse. Nearer the ridgeline were also a few muddy sections which we negotiated with care. We finally came to the Dew Lakes after 3¼ hours from the start. The name ‘lakes’ are a bit of a misnomer as they are really just large shallow ponds, not that I tested the depth of them. We pushed through some scrub and trees amongst the boggy ground onto more solid and clear ground with views east to Mount Fishtail on the Richmond Range and north to the Marlborough Sounds. Here we sheltered from the south west wind and enjoyed lunch and the panorama. It was a quicker return the same way but with two differences, which were the Pylon Exit Track and Flax Gully Road, both slight detours off the usual route. This finished a 6¾ hour day which was a worthy ‘Plan C’, especially with our new discovery of a rock shelter.