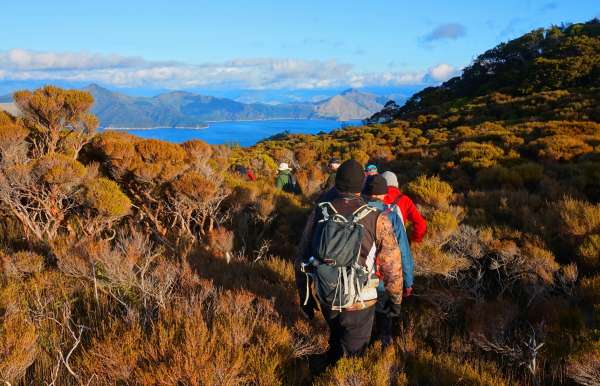 French Pass is about 100 km from Nelson, which will take approximately 2½ hours to drive. A sign facing in the wrong direction sent three of our vehicles towards Cissy Bay rather than French Pass. Fortunately a sense of direction prevailed and the error was realised before too long. We took four vehicles (two trips of two vehicles) and a bike across on the barge to D’Urville Island, landing at Kapowai Bay. From here it was a half-hour drive to the Community Hall, situated all by itself on the main ridgeline of D'Urville Island. Great views to the northeast.

After settling in we drove back to a quarry and followed up a ridge to Attempt Hill at 729m, the highest peak on D’Urville. Some returned the same way and walked along road back to the hall, while others followed a marked track to another lookout point and then back to the road and the vehicles.

On Sunday most of us walked from hall along the road to the Kiangawari School Track. This track follows downwards past an old pa site and to the old school on the foreshore. There is no formed track but it is well marked. Just before reaching the old school there was a coastal track leading to a waterfall. Most of the group did this 30 minute detour while others ambled on towards the Wilderness Lodge in Catherine Cove. By midday we were all having lunch on the stony beach, followed by the option of a coffee served at the lodge.

We knew of the steep four wheel drive track and intended to follow that back up to the hall. We thought we were doing great until someone - with modern technology - exclaimed that we were on the wrong track. We did now know from a local, that there were alternate routes, so we decided to continue. Before long the call “orange track markers” was heard - what security they bring! As it turned out we were on the Ridgeline Circuit Track as marked on a vague brochure we carried. Yeah, this was really the track we wanted to be on, so good mistake in not finding the main four wheel drive track from Catherine Cove to the ridgeline. This circuit took about six hours. The same day a smaller group drove towards Mt Ears to look for argillite quarries. They succeeded and then drove all the way to Waiua Bay and had a cuppa with some locals.

On Monday two vehicles drove to Greville Harbour for a look around while the rest went to Mt Ears. Mt Ears is a ten minute walk from the road or a three hour return trip if walking from the hall. Shortly after midday on Monday we were assembled at Kapowai waiting to be barged back to French Pass.