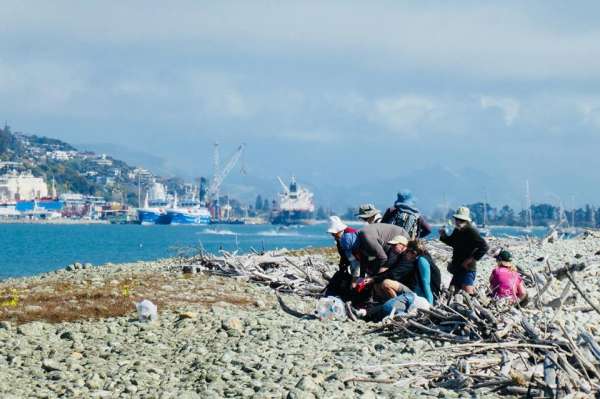 “The walk to the Boulder Bank Lighthouse is a walk that everyone should do”, the locals told me when I first arrived in Nelson. Before adding knowingly, “but you’ll only do it once.” Never one to turn down a challenge like that, I felt compelled to do it twice this year, the second time with a band of twelve Waimea TC hikers on a glorious spring day.

Because it’s an awesome walk!  And here’s why...

There was the changing view on the sheltered city-side as the tide eased out and crept back in. There was plenty happening in the lagoon and port, with large ships, small boats, kayakers and paddle-boarders. There was a log-carrier inching through the Cut towards the port, seeming to lazily roll along the top of the boulders. Meanwhile on the seaward-side, the waves consistently rolled in, back-dropped magnificently by the snow-capped western ranges, and with one solitary seal to be seen frolicking in the surf.

There were shags. Lots of shags. Shags literally smothering the famous Shag Tree, and plenty of action brewing in their many nests. There were Royal Spoonbills, not one or two, but a majestic posse of eight beautiful specimens. And there were of course the usual busybody noisy oystercatchers running crazily around, and gulls zooming through the skies, plus a few delicate dotterels to round out the avian action for the Birders.

There were the colourful old baches to fossick around the outside of, all in various stages of rustic repair and disrepair. Some lovingly restored, and some slowly succumbing to the relentless march of time. Some dripping in beach memorabilia, and some austere in their simplicity. But all of them in the most superb beachfront location, and all of them a slice of Kiwiana at its iconic best.

And of course there was the lighthouse, standing proudly in its small meadow of oxalis, wild freesias and irises. We opportunely reached it at about midday, so had a leisurely lunch in its long shadow before our return journey. We had a key, so could climb to the top, crawl through the low hobbit door, and walk around the lamp-turret for spectacular 360° views.

Finally, there does need to be acknowledgment of the boulders. Yes, there were lots of them. Lots and lots! Bigger boulders at the Glen end, gradually reducing to smaller rubble towards the Cut. And there was rubbish. Lots of rubbish. Rubbish washed and blown over from town, ranging from small parking tickets to large alien-like metal drums. We easily collected about 20 bags of this noisome jetsam - thanks Team WTC.

Back at the cars, we had a debrief. So what did you think of it? I asked the crew. Their unanimous reply:  “It may have been an easy walk, but it was mighty hard on the feet”.