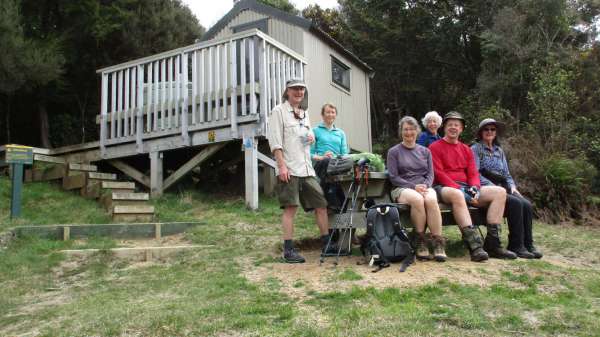 A big group of twelve trampers participated on this trip in Abel Tasman. The new enlarged carpark at Marahau was still a work in progress and the new shelter has been somewhat controversial with its ‘bus-stop’ shape. Very quick progress was made along the Coast Track amongst the lush seaside bush until we reached the junction with the Inland Track just past Tinline Bay. The track headed uphill at a steady gradient, and with no rain for three weeks beforehand, the underfoot conditions were good, as this clay based track easily becomes very slippery. It was deceiving how much climbing we had to do, but we soon reached a viewpoint down to the coast.

At the junction with the link back to the coast, the party split, with six keen to head along to Holyoake Clearing Shelter and the others continued down the link track. We soon reached the shelter but were disappointed that low cloud gave no view at all. After a short rest we returned and descended the link track, meeting up with the others who had stopped for lunch, waiting for us at a place with good views. When we all re-joined the Coast Track it had taken one hour and 20 minutes descending from the Inland Track. This section of countryside is dominated by the ugly invasive hakea which has worsened over recent years, hopefully one day to be replaced by native species. In contrast with the cloudy interior of the park, the coastal section was sunny and the idyllic sandy beaches were sparkling. The return along the coastal section was a steady slog past several bays but two of the group preferred to walk the last part on the beach. This completed a nice day in the park taking just over eight hours in total and a distance of 23 kilometres.