Further than you think 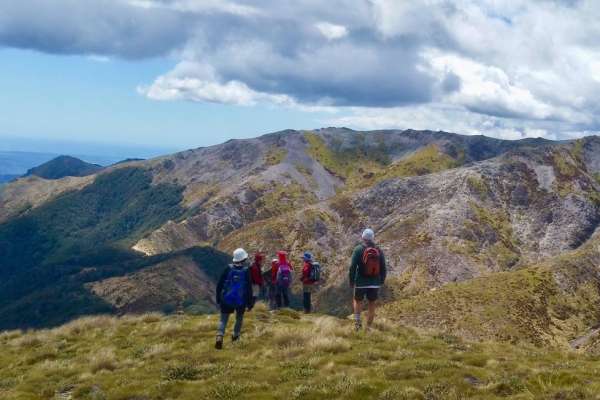 This tramp should be done once a year. It’s a classic and with easy access, like Parachute Rocks or Wooded Peak. There were nine participants on a nice day, but one where you put layers on, then take off. The start is from Inwood Lookout off Wai-iti Road, which looks like half a lighthouse and is not manned now. So we headed along the Gordons route which was mostly open and pleasant and after 50 minutes the group climbed up some rocks and scree, with decent views at the top. A photo stop and a morning tea stop too, with just a slight wind but the sun shining. The party carried on and after about 20 minutes we branched to the right where there are cairns placed to show the way, but it can be tricky to find them. We were in and out of the bush again several times and down on our left was the start of the Motueka River. We could see our destination but it’s further than it looks.

Finally out of the bush to start the climb up the ridge, with good footing on the tussock, the group was spread out a little, but we were all in sight. Once at the top of the ridge we sidled left and just keep going to the trig at 1592 metres. It was reached by lunchtime and most of us had cameras out as there were views of the Arthur Range, Mt Owen, Ben Nevis and the Red Hills, and there was some ice on the top here too. A leisurely lunch in the sun and we were joined by a young couple with their friendly dog. Heading back down, the clouds came in, then it was sunny, jackets on and off.

At times we had to be cautious going down, taking small steps. I was glad I had the sunblock on, as the sun was in our faces most of the way back. We finished in 6¼ hours. A strong group and a thank you to Rob and Maria for backup on this trip. Some of us went back to Rob and Maria’s afterward for tea and biscuits.