Rock formations at their best 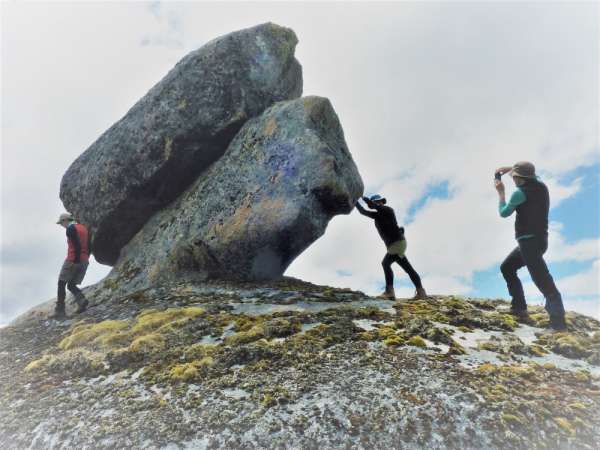 Sunday morning, an early 7:30am start at Richmond Badminton Hall and a promising looking day, after heavy rain on Saturday. After an hour’s drive we parked at the small grassy area next to the Boulder Creek on SH6, 4km south of the Moonlight Road intersection and 3km north of the Kawatiri Junction, and ten trampers were ready to go.

The track is unmapped and unmaintained, although individuals have put up markers every now and then. Good navigation skills and local knowledge are still recommended. Maria added more markers on the way up, while Rob used his secateurs to do some trimming.

After a short warm-up along the embankment of the creek, the track climbed steeply through beech forest. About halfway up the climb we came, surprisingly early, out of the bush. We were able to see the Hope Range with tussock and granite rocks in interesting shapes that reminded us of Easter Island, with expansive views towards Mount Owen and behind us to the Richmond Range and the St Arnaud Range. It was a further hour’s climb to our lunch stop at the highest peak (1264m), just north of Mount Hope (1244m), where the rock formations are at their best. There were no track markers anymore, and with trial and error we found clearances through the low scrub and trees. High clouds starting rolling in, but didn’t disturb our views. At lunchtime most of us climbed the balancing rocks, a real landmark in this beautiful landscape.

Thanks to Maria we found our track back downhill, in the meantime looking out for Julian’s walking pole he had lost on the previous tramp! No luck, Julian…. The steep section through the bush was also a bit tough on the way down, but we were back at the cars by 4pm without any problems.