A new trip with great views 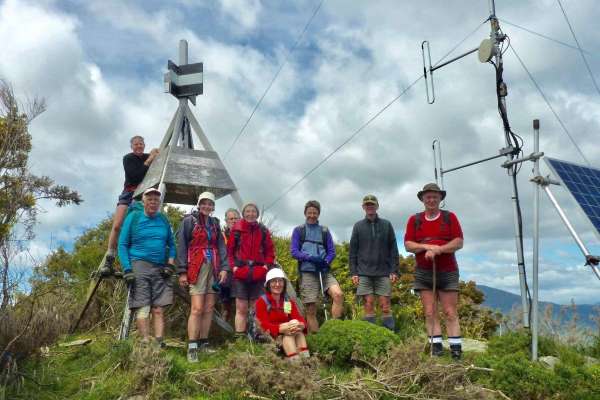 Saturday morning was murky and damp as the remaining two cars turned up at Wakaretu Bay to join those who had arrived late on Friday night, swelling our numbers to nine. Late morning, after everyone was settled in, we walked along the road to the next creek toward Kaiuma Bay. Here we entered the wet bush and followed up a trail to the head of the creek where we sat amongst the roots of a huge matai tree to refuel ourselves.

From here the trail leads up over some bluffs and then out onto the dirt road leading to a cell phone tower visible from the bach. Now we were exposed to the strong northerlies so rather than going to the cell phone tower we headed back the other way along the road, leaving it at the bush edge, to follow the trail down a ridge back to the bach. This was about a three hour circuit. Later in the afternoon we again donned on our parkas and did the one hour circuit around the peninsula and along the foothills of the bay. The evening was relaxing and we were cosy inside watching the drizzle outside.

Sunday dawned a fine day. Our goal of the weekend was to get up Mt Oliver, behind Anakiwa. After breakfast we drove to Linkwater and along towards Kenepuru Sound. Just before the second forestry road on the right we pulled up on the outside of a wide curve in the road. From here we walked about 45 minutes up and along the forestry road. Then we clambered up the bank, near a gully, and entered the beech forest. The trail took us up a spur and onto a ridge, which we then followed northwards, to pop out of the bush on Mt Oliver. From here there are great views out to Pelorus Sound on one side and Queen Charlotte Sound on the other. A perfect spot for an early and long lunch break.

Eventually we descended, by the same route and returned to the bach for refreshments and then it was time to pack and clean up. The Mt Oliver tramp was about 4½ hours in total. Many thanks to Jeff for the use of his bach and for introducing us to Mt Oliver.

Those members participating were Rob, Maria, Jeff, Jill, Bob, Eric, Esther, Alison and Andrew. Kyra, a visitor from America, joined us on the Mt Oliver trip.