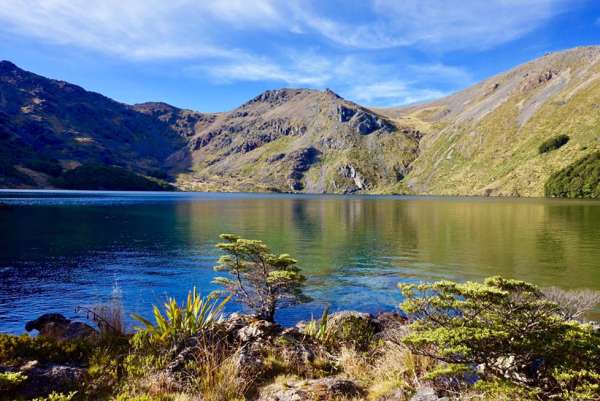 Ten keen trampers set off early on Saturday, on the planned trip from the Cobb Dam over Iron Hill to camp by Ruby Lake, but a gale above the bushline made us change the plan. Instead we followed cairns down a tussock lead through stunted beech to Iron Lake Stream. We left the cairns and went down on the true left side of the stream through scrub, tussock and bush to Diamond Lake Stream, which we crossed to pick up the trappers' track to Lake Lockett. We found sheltered tent sites and a very well set up toilet near the lake, as the wind howled through the treetops. A stroll along the track to Diamond Lake and back filled in the rest of the afternoon, but the wind kept us from going up Mt Lockett.

This change of plan shortened Sunday's walk out on an equally windy day. We followed the track back down Diamond Lake Stream and reached the old quarry below the Cobb Dam in under four hours, giving us time on the return journey to cool off with a swim in the Takaka River and for a coffee break on the Takaka Hill.