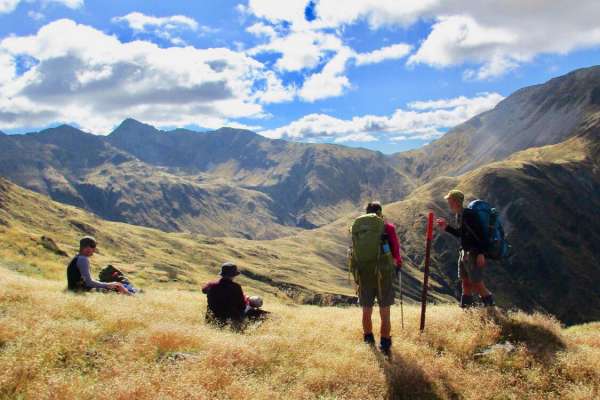 Fine weather was on order for eight trampers as we travelled 3kms west of Springs Junction on SH7 then 17km to the end of Palmers Road. On our way we left one vehicle at the start of Lake Christabel Track for a car shuttle. The Robinson River Track skirts left around the farm at the end of the road, following a fence line for 40 minutes then follows a muddy track for ten minutes to reach the river. We continued up the valley, often on grassy river flats but with a few large windfalls to scramble over, before we crossed a swingbridge over the river. Further up the valley, the water level was fairly low after no recent rain, so we opted to cross the river on the flats several times rather than unnecessarily taking a longer way on the terraces. But soon the valley narrowed and the going became more rugged with a choice between a rough riverbed or the track on the riverbank, often thick with hook grass and some large logs to negotiate. Eventually we reached a swingbridge crossing back over the river to the six-bunk Mid-Robinson Hut in a sizeable clearing, 5½ hours from the start.

It was fine again on Sunday as we continued up the Robinson Valley. The track stayed on the left of the river and was easier going, but still not easy, with lots of scrambling needed and still with unrelenting hook grass. The highlight of the day was a kea sighting, with it following us for ten minutes in the tree tops. The crossing of the first three-wire bridge wasn’t as scary as expected, because of netting halfway up each side making it much safer. From here it was only 15 minutes to the ten-bunk Top Robinson Hut in a small clearing surrounded by mature red beech. This was another 5½ hour day.

Monday was cloudy as we set off at 7.30am, crossing a three-wire bridge after ten minutes. Then we steadily climbed a spur, which became very steep for a while, before we emerged from the bush with good views back down the Robinson Valley. Then it was a much easier gradient on grassy slopes and we soon reached the saddle, 2½ hours from the hut, just as the cloud cleared. We enjoyed exquisite views of the tussock tops of the Main Divide before sidling across the slopes to the edge of upper Blue Grey River. Then it was a 45 minute steep descent to the first pocket of bush close to the river. We found this section quite tricky, not being able to see our footing because of the undergrowth of flax and ferns. Because of avalanche debris, the track descended into the riverbed, then climbed up again into the bush. Then it was a steady descent to cross another three-wire bridge, this one with a ladder at each end. After this it was a further 1¼ hours to the ten-bunk Lake Christabel Hut beside the right branch of the river. After a long 7½ hour day we felt hot and tired, so a few of us cooled off with a quick bath in the shallow river.

Tuesday was cloudy as we left the hut at 7.30am, taking 30 minutes to reach Lake Christabel. Then it took 2¼ hours to walk to the lower end of the lake, with the track only coming down to lake edge in a few places. The going was tricky in a few places where there were steep lake-side slopes. From the end of the lake it was a 100m climb up a hill, the debris from an ancient earthquake landslide that formed the 90m deep lake. The track gradually descended, eventually coming within sight of the river, then the last 20 minutes were on river flats, before we reached the end of the track. The car drivers had rushed ahead, so there was no waiting for our transport to arrive. This completed another long 7½ hour day.

This track has a low number of users, particularly the Robinson Valley, which has less than 100 visitors per year. The hut book at Mid-Robinson Hut dates back to 1993 and is still only half-full. Likewise the Top Robinson Hut has a hut book that started in 1994 and is still not full, but has been replaced with a new book. We were surprised that we met only two other people on the entire trip, who were a couple from Nelson, tramping the same days as us.

The trip was not all smooth sailing, with two people feeling unwell at times, one person getting a slight burn and two people suffering some wasp stings. Despite these events we still enjoyed a rugged but rewarding trip, especially the majestic alpine tops. The trampers were Robert, Joy, Esther, Eric, Maria, Rob, Diane and Pete.