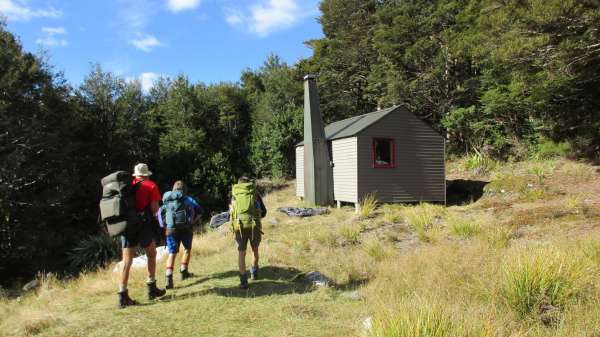 We started out from Rolling River at 9:10am in fine weather but with a chill in the air. At the lake halfway up, we counted about 14 whio in two groups of seven. After 3½ hours we reached the Wangapeka swingbridge and we had lunch just over the Kiwi Creek swingbridge. With lunch done, we headed toward Kiwi Saddle and about 20 minutes up the track noted what looked like a plant related to bush lawyer, in thick sphagnum moss with red berries similar to a boysenberry, but very hard - one for Chris to identify. Three hours after lunch we got to Kiwi Saddle Hut after a 6½ hour day. We meet two others at the hut, so we filled the remaining bunks. The other two were hunting geocaches - a very addictive hobby, but obviously a good incentive to get them in the hills.

Sunday dawned fine, so we headed toward Patriarch and at the top of the ridge three of us decided to try to get to Patriarch while Maria waited, but unfortunately about 15 minutes from the top the weather closed in, so we turned back. The trip then continued along the tops to Gibbs Route down to the Wangapeka. Lunch was enjoyed in sunshine at the bushline on the Gibbs Route. The route down was good with the first half through very open mature forest, then the grade steepened for the second half down to the creek with a further 20 minutes to reach the Wangapeka River. The river was not too deep but the boulders were very slippery with algae. The last half hour back to the cars completed an eight hour day.