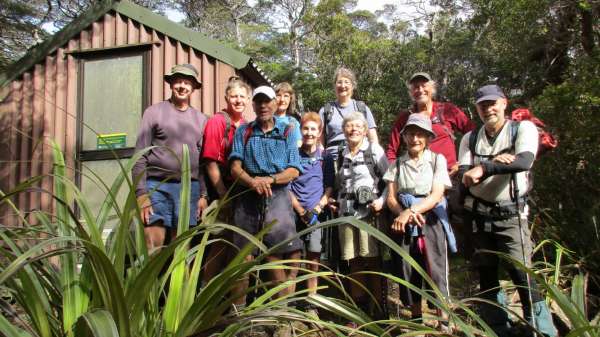 A fine calm day was enjoyed by ten people in the hills of the Marlborough Sounds. After one hour’s drive from Nelson we parked at Opouri Saddle at 500m on the road to Duncan Bay. We followed a track with blue triangle markers, climbing steadily at first, then steepening before reaching the first highpoint at 930m with a view out of the bush after about an hour. The space for us to have a stop was cramped, but we made sure we made the most of the attractive view down to the numerous bays of Tennyson Inlet. After plenty of ups and downs along a narrow bush ridge we came to the second viewpoint at 977m after another hour. There were some steep sections on the ridgeline but we eventually reached the locked two bunk Editor Hill which is used by DOC for snail monitoring work.

About 15 minutes further along we came to a junction in the track, with simple handwriting on a blue triangle marker as “SIDLE TO ED” which we decided to follow. This traversed below the ridgeline but soon the previously fairly well cleared track became harder to follow because of regrowth and sparser track markers. We continued as the track turned, climbed up and arrived at summit from the opposite northern side after 3¾ hours from the start. Bush at the top doesn’t give good views and also cloud here completely prevented any chance of any outlook. A simple pipe marks the actual summit at 1032m. After lunch we descended the alternative track down the other side including a climb over Pt 1040 and then more steeply down to the track junction and back past the hut again. We returned down to the cars to complete a pleasing eight hour day. It was a bonus to find the alternative sidle track to the summit which had not been attempted on any previous club trips.