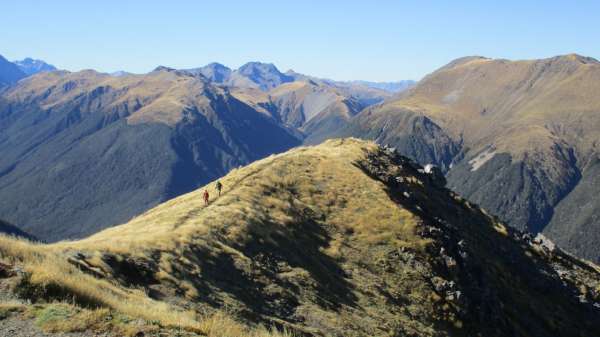 A carload of four keen trampers headed off to the scenic Lewis Pass area for Easter weekend and set up residence at the spacious 65 bunk Outdoor Education Centre in the alpine hamlet of Boyle Village.

We picked the best fine day to head up to the Lewis Tops. Driving back to the pass, we walked from the St James carpark, across the road to the Lewis Tops Track. We reached the first lookout after half an hour, where we enjoyed lunch and the views. Then onwards, it was one hour’s steady climb until we popped out of the forest and onto the tussock ridgeline. We carried on climbing and after a few false summits we reached a highpoint at 1568m, after 2¼ hours and a 700m climb. We soaked up the brilliant views of the adjacent tarn (shaped like Lake Rotoiti with a peninsula) and across to Mt Technical. We did not linger long because of a cool breeze and returned back to the cars and the lodge.

Saturday was cloudy as we set off for Lake Daniell from the Marble Hill campground. We enjoyed an easier day for the legs and lungs on a good track through pleasant bush, taking two hours to reach the Manson Nicholls Memorial Hut. This was the last week of use of the old hut before being replaced with a new hut ready for use in February 2020. We decided to carry on to the head of the lake following an old track near the lakeside. About halfway the trackside regrowth and few markers made the track harder to follow, but we did reach the head of the lake taking about 30 minutes. While having lunch we were very surprised to see quad bike tracks on the pebble lake shore. This spurred us on and we followed an old muddy and narrow 4WD track twisting through the bush. We soon emerged onto a rough grassy clearing and spied the nearby Thompsons Flat Hut, 30 minutes from the lake. This is an ex-Forest Service four-bunk hut, which is unmaintained but still useable, however it is on private land. We didn’t stop long and returned to the Marble Hill carpark, taking three hours, with rain in the last hour.

On Easter Sunday it rained nearly all day until late afternoon when we managed to get out for a quick walk across the Boyle River Bridge to the start of the Mt Faust Track. But the day was more eventful for another reason. In the morning, search and rescue volunteers and police arrived to search for a Christchurch woman still missing from the previous day in the Nina Valley. They set up their communications van outside and we were allowed to listen in to the briefing in the lodge for the 17 searchers and two police. The four of us were all involved in some small way, providing food and drink for the communications team as well as the searchers returning to the lodge. With ingredients supplied by the lodge warden, Eric baked batches of scones, Esther heated up three different flavours of soup in large stockpots, while Julie and Robert also helped provide food and drink to the appreciative searchers and police. The missing woman had set off from Nina Hut ahead of the other two in the group, but had gone off track near Lucretia Stream and was not noticed missing until the end of the track. After some searching overnight, the good news came through mid-afternoon when the tramper was found safe by the searchers. A good lesson about not setting off alone from a group.

On Monday it was a clearer day at Duffy Creek, near Rahu Saddle, an ideal shorter tramp while on the way home. The track is described by DOC as a route - somewhat rough with many tree roots and some muddy patches but at a reasonable gradient. Nearer the end it became more of an obstacle course where the track has suffered a double whammy, with some earthquake debris, perhaps from 1968, as well as windfalls from Easter 2014. But the effort was well worth it, as we emerged onto a nice large but swampy clearing near the head of the valley after 1¼ hours from the start. We enjoyed a stop here with grand views up to the tops of the Victoria Range. The return was made to the cars for a total day of only three hours. We returned home by taking a different route through Reefton.

An enjoyable but eventful Easter for Robert (scribe), Julie, Esther and Eric