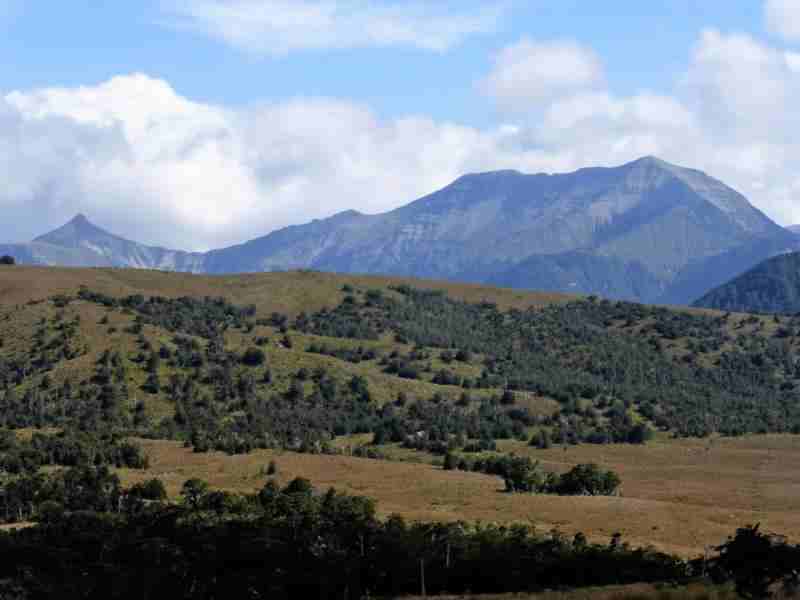 Looming above the Matiri Valley are the fortress-like bluffs of the 1000 Acre Plateau, the oldest land form in New Zealand and the destination on this long weekend.

Day 1: Two carloads travelled to the Matiri Valley on the Friday night to meet up at Lake Matiri Hut around 6pm. Some tented in front of the hut but others slept inside. The place was abuzz with wasps and there were plenty of sandflies too. Lovely to hear a morepork.

Day 2:  We set off around 7.30am knowing the day could get hot and wanting to do the steep climb to the plateau in the cool of the morning. The day was misty so we didn’t get any views back into the valley. We were at Poor Pete’s Hut around 10.40am and after a short stop to fill water bottles we continued on to Larrikin Creek Hut. Around halfway we headed off to the right into the edge of a finger of bush to have a shady lunch break. Some of the creeks were dry and others had small amounts of water in them. The ground was generally dry with many small tarns dried up. We reached Larrikin Creek Hut shortly after 2pm and spent the rest of the day trying to keep cool in the shade.

Day 3: Another early start to beat the heat of the day. We were on The Needle at 8.45am, having come up a ridge and sidling onto the saddle between The Needle and The Haystack. Then we climbed up a grassy area to the top. Awesome views in all directions. On the descent we went down the south ridge to a notch and then headed down a grassy spur towards the tarns. The vegetation was easy to walk through until we reached some scrubby stuff, but we could get into a gut to the right and come down that. At the bottom we picked our path to avoid the prickly Spaniards, crossed the dry creek and walked up to the tarns. One tarn had tadpoles and a couple of people that had camped there the previous night said they had heard frogs. The trip from Larrikin to The Needle and back took just over three hours. After a break and dips into the pools on Larrikin Creek we set off back to Poor Pete’s Hut where we all camped for the night. Once again we heard a morepork.

Day 4: Another clear warm day, so this time, we got the views down into the valley as we descended. Once down at the lake one person cooled off by going for a swim. The rest of us waited for our swim until we got to the Matiri River, where we were joined by a huge eel.

We all had lunch together in the first shady spot along the 4WD track before the 4WD carload departed and the rest of us walked on out, picking blackberries all the way back.