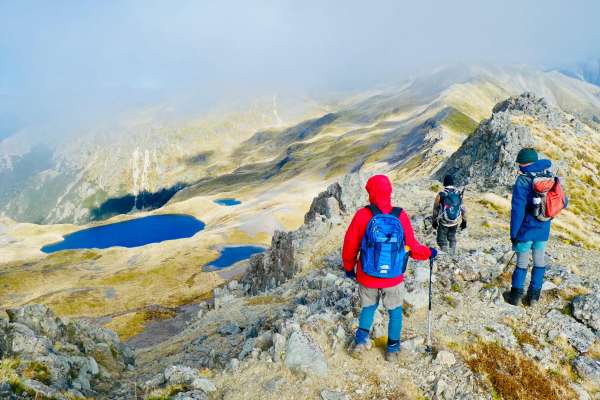 It was a stunning blue-sky morning in Kerr Bay as we watched the mist rise eerily off Lake Rotoiti. A temperature of minus-one had us rugged up against the chill, but soon our party of 13 were off up the hill and layers began to be discarded.

All the way up through the forest we were captivated by the fabulous display of toadstools, all competing for Best In Show. Purple, yellow, brown, white. The parade featured both single exquisite specimens, and huge clusters. It took our mind off the incline.

Soon after emerging from the bushline at 1400m we arrived at Parachute Rocks, named after a nearby parachute-shaped gravel scree slope. After the obligatory photo shoots, we then went up through the tussock to the St Arnaud Range ridgeline at 1650m, where we had lunch. Low cloud which had appeared during the climb slowly dissipated to reveal whole new vistas of tarns and mountains.

After lunch the group split in two, with one party returning to the cars by the same route, while the rest of us carried on along the ridge and were treated to increasingly spectacular views. Gorgeous brilliant blue tarns and the Raglan Range to our left, and Lake Rotoiti and the Travers Range to our right. Stunning!

After about a kilometre we dropped down a steep spur, which at first was slippery scree and tussock. We then hit the forest, following a trapping-line which was aptly named ‘Grunt’ on the marker at the top. We were treated to more terrific toadstools, but it was with great relief that we finally hit the Lakehead Track and could motor along on nicely benched track back to Kerr Bay.

The off-track group were out for 7 hours. We were:  Diane (leader and scribe), Pete, Eric, Esther, Colin and David. The on-track group were: Marian, Alison, Donell and Odette, plus visitors Missy, Gael and Sue. Everyone was treated to the leader’s fine baking once back at the cars.