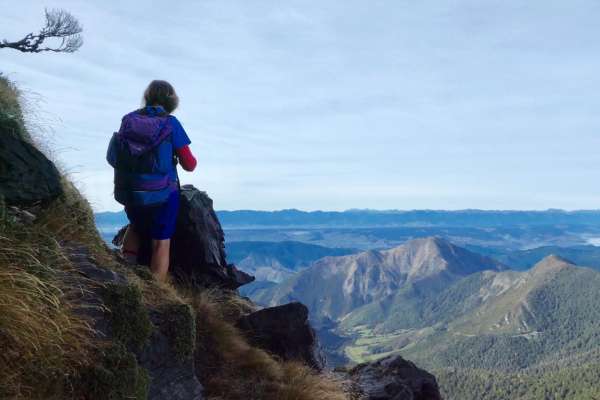 The weather forecast for Sunday was not very good, but several people still contacted me, keen to go. Most of them were able to go on Saturday instead, and so I decided to change the day. I hadn’t been up Mount Hodder before and was pleased to have three experts with, and together with the notes from previous trips we had no difficulty finding our way.

We started from the Flora Carpark, and with a steep section at the beginning, it didn’t take us long to get some good views. We had morning tea at Mount Lodestone, about 10:15am. A cold wind had picked up and some clouds rolled in, but on the lee side we were sheltered and still had good views. From the top of Lodestone we followed the spur leading in a NW direction. Near the bushline are faded pink markers to the entrance of the trapping line into the bush. The track has pink markers until the saddle and was fairly easy to follow. There is one steep section with many Neinei (dracophyllum) leaves which were a bit slippery. From the saddle we swapped pink markers for yellow markers (all the way through). The trapping line is marked as F-line and near the top of Mount Hodder where there is choice, we kept left to follow this line.

We had lunch at the top of Mount Hodder which has several open spots. The wind had dropped and the temperature was surprisingly warm, plus we enjoyed great views in all directions. From the top we descended to a saddle following the yellow markers. At the saddle one yellow trapping line continued but we turned left (at trap F37) dropping into the Saddle Creek catchment, continuing the yellow marked F-line. We crossed several side streams through beautiful bush until we crossed the Flora Stream (no wet feet!) to join up with the main track. Turning left we walked for half an hour to the Flora Hut where we had afternoon tea. We noticed the large stack of new double-trap boxes of which we had already seen several on our walk. What a job to carry all those traps in to the right places! At 3:45pm we were back at the carpark: a 7-hour walk we all enjoyed very much.

During the day Joy took photos of a great range of fungi in all colours and shapes, while Maria practised for the first time with her topo maps and track marker app on her phone. Please note that we followed a trapping line managed by Friends of Flora. In the future, changes may happen to the signposting or route of the line.

Those on the tramp: Joy, Maria, Rob and Esther (trip leader).