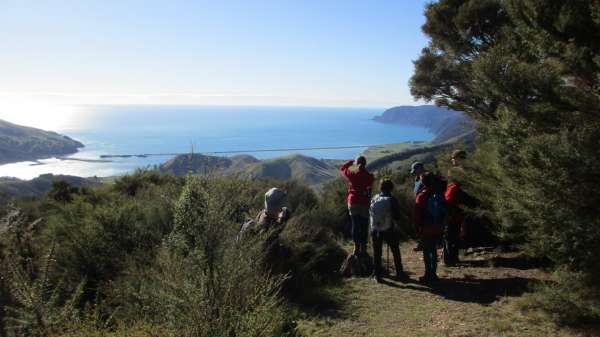 On a fine sunny day it was a short drive to Hira where our group of 17 trampers parked at the Cable Bay Adventure Park. After we signed in individually, we started off across the Wakapuaka River, then past the paintball area and ambled uphill on a vehicle track at a pleasant gradient. We soon reached a bend in the road beside the splintered stump of a giant matai tree which was claimed to be the tallest matai tree in NZ, before it was shattered during a storm at Easter 2014. We arrived at the Skywire terminal up a short side road, an hour from the start. We enjoyed our cuppa on the veranda at the Skyline café but there was competition in the valley below for who could make the most noise with motocross racing as well as firing from a shooting range. Soon some quad bikes arrived and three people prepared for a ride on the Skywire, the world’s longest flying fox ride. We watched keenly as the group zipped across the valley at 80km/hr to the other terminal and back again.

From the Skywire we followed the Gamble Trail MTB track up to Blue Hill. The track was built in 2018 by staff from the park along with volunteers. The first part included a few short steep sections with some variety in track direction on the ridgeline - enough to keep us guessing. The only good viewpoint on the uphill section was midway, looking across to the Richmond Range. We soon reached a steep 4WD road but the MTB track continued across the road and climbed a short distance further to the summit of Blue Hill at 609m in a very small clearing, marked only by a steel pipe and a wooden post. We continued along the track and back onto the road to a signpost indicating the limit of access allowed. This had taken us 2¾ hours from the start. We enjoyed lunch here in a narrow avenue of sunshine.

On our return we descended the 4WD road and soon arrived at the Bayview lookout, at the end of a short side road, with stunning views over Pepin Island and Delaware Bay. After a long zigzag the road curved back to just below the Skywire where we descended a steeper and more direct 4WD road down to the valley floor to complete a figure-of-eight route. We took in refreshments at the carpark café which completed an excellent adventure of about five hours altogether. We also chatted with Richard Ussher, the friendly owner and a five-time winner of the Coast to Coast multisport race. Future plans are to extend the MTB track within 18 months to form a complete loop off-road. Walkers are welcome without charge in the park, but patronage at the café is encouraged.