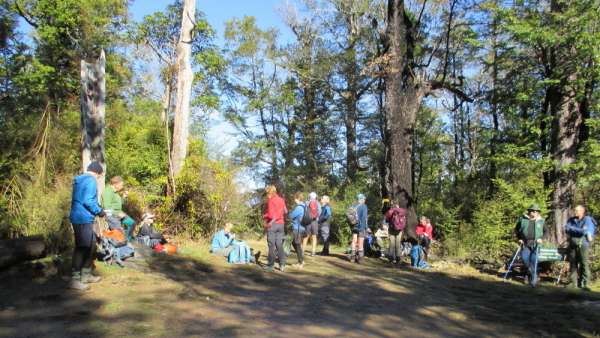 In bright sunshine, sixteen trampers gathered around the map display at Marsden Valley carpark. Their choice was to ascend the valley by the gentle but longer Involution Trail or the shorter but steeper Scout Track. Six opted for the former and ten for the latter. When we re-met some two hours later everyone seemed happy with the choice they’d made. Thanks to Marian, those on the Scout Track were lucky enough to hear then see two kārearea (NZ falcon) flying overhead.

Our meeting point was adjacent to Widdershins Track which we now followed for about 30 minutes across the top of the valley to Glider Road. Widdershins, like Involution, is a purpose-built MTB track and we encountered a few cheerful cyclists and e-bikers. A few minutes later we emerged onto Parachute Point (604m) to a view of snow-clad mountains. Some enjoyed identifying peaks along the Richmond Range while others nabbed the seats and enjoyed views of Tasman Bay and the western and southern ranges.

After a leisurely lunch we descended Glider Road taking about an hour. Near the bottom, spying the quarry, Julian pointed out igneous intrusions into the greywacke that make this quarry so useful. At this point the trip officially finished although Bernard and Colin investigated the entrance to the tunnel bringing water under the hill from the Roding Dam to supplement Nelson’s water supply. Overall, a very pleasant five hour tramp. Trampers: Alison, Bernard, Colin (leader/scribe), David, Doug, Grant, Jeni, Jo, Julian, Ken, Marian, Merrick, Sue, and visitors Nicky, Paula and Ross.