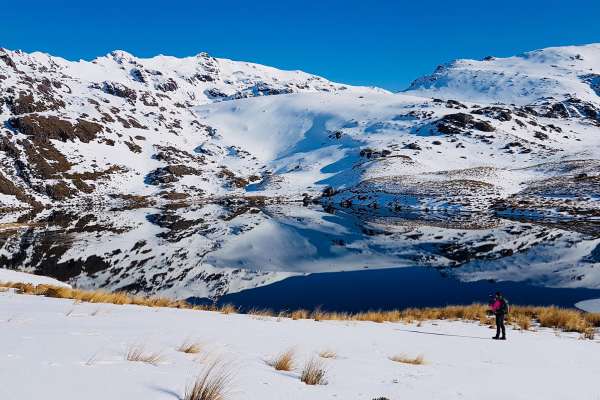 Nine trampers left Richmond in three cars at 7:30am and arrived at the Cobb Dam lookout in sunny but cold windy conditions. After a brief stop to admire the view we continued to the Lake Sylvester carpark, loaded up and started the climb up to the hut at 10:15am. We were pleased to see only one other car in the carpark. We first reached small patches of snow well down the track and once above the bushline the snow was quite deep in places. By the time we reached the hut the wind had dropped and the weather was perfect. There were two others in the hut so we just had enough room but one member was happy to camp under the trees.

After lunch we all set off up the ridge to the north of the lake enjoying views over Golden Bay. Further on we had fantastic views of Lake Lockett and even Mt Taranaki. At this point three members of the group decided to amble back to the hut while the others continued southwards along the ridge. Eventually only the member who was equipped with snow shoes was prepared to tackle the softer snow around the lake and the other five retraced their footsteps back to the hut. The day was certainly a great opportunity for photos with stunning views of the snow and lakes. Iron Lake was rather obscured by being frozen over and covered with snow.

It was not necessary to light the fire in the hut; it was so warm with us all in it. Just after dark we were surprised to see two more people arrive at the hut equipped with skis and large packs but they were happy to share a mattress for the night. We all had a good night’s sleep in a quiet hut. Despite a frost the camper was surprised at how warm it was in a tent under the trees and would encourage others to try winter camping.

On Sunday morning the weather was very clear with Mt Taranaki showing very clearly on the horizon. We all headed for Lake Sylvester but split into two groups with the more ambitious group going up the ridge towards Iron Hill to get great views down into the Cobb Valley and of all the distant mountains. The only cloud looked like smoke and was probably from the fire at Porters Pass in Canterbury. After reaching the summit of the ridge we headed back down, some taking the option of sliding down the snow. We were all back at the hut for lunch and departed for the cars earlier than planned. Two cars loads stopped for a coffee at the Woolshed Café near the top of Takaka Hill and enjoyed fine food in the sunshine.