So much sun, so few people! 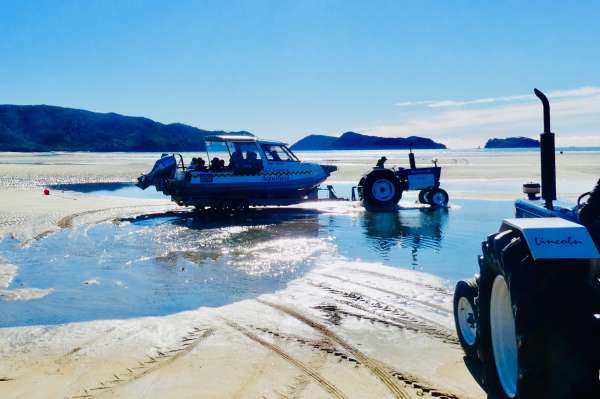 Spring is a wonderful time to visit the Abel Tasman National Park, when the influx of summer tourists is yet to descend on this gem of a track, but the weather is usually kind. Or in our case, simply stunning.

We had a private water taxi charter booked for an early departure ex Marahau, but the requisite minimum of 10 people wasn’t achieved, so we took the scheduled 9.30am sailing. It included a free tractor ride, as we sat in the boat as it was towed out to the water. The next freebies were a detour to Split Apple Rock, and then to Adele Island to check out the seal colony. 45 minutes after setting off, we were deposited at Medlands Beach, just south of Bark Bay. We climbed past the kaitiaki (guardian) above the beach, and we were away under a brilliant blue sky.

We set a fairly fast clip in the hope of reaching Torrent Bay to take the low-tide bypass before the incoming tide became too much ‘incoming’. After eyeing the wide expanse of the bay with its runnel of water stealthily creeping through the middle, Karen and Julian quickly forged off, boots and all, getting wet up past the knee. Colin and I decided on a shoes-off approach, and then trailed after them, picking a route with the least number of sharp pipi shells. The tide was rapidly surging in, but happily we managed to reach the far side of the bay with dry undies (just).

We had a leisurely lunch, basking in the sun and airing/drying our boots/feet, and smug in the knowledge of over an hour saved by not having to take the high-tide route. Shortly after resuming our walk, we arrived at Anchorage Bay. We had the usual sight of its long gorgeous arc of golden sand, but the unusual sight of not a soul to be seen! We popped along to check out the DOC hut and its attendant kaitiaki, then started the long climb out of the bay and up the hill.

The home stretch back to Marahau was mostly high along the ridge top, with expansive sweeping views, but its sheltered beaches were only reachable by side-trails. From Tinline Bay onwards we were at beach-level, but by then get-home-itis had set in. Finally, six and a quarter hours after setting off from Medlands, and with the sun sitting low in the still brilliant blue sky, we were walking across the Marahau boardwalks and through the waharoa (carved gateway arch) at the end of the track.

All in all it was a terrific day. The Abel Tasman Coastal Track isn’t one of the Great Walks for nothing. The company, conversation, weather, beaches and views were all great. Thanks Julian, Colin and Karen for joining me. Diane (leader and scribe).