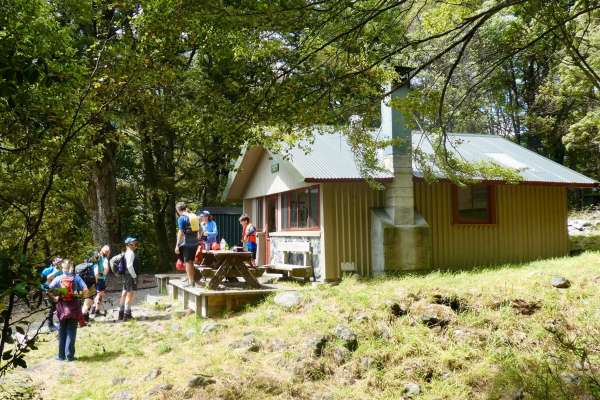 This tramp was the first club day trip of the new year and the new decade. It was a fine, still and warm day both in Nelson and at the lake so ideal for tramping. A keen bunch of eleven returning trampers along with four visitors met at 7.30am at Richmond. As we had four drivers it seemed a great idea to have two cars driven directly to the Mt Robert Road carpark close to start of the lakeside track and two cars driven to Kerr Bay.

I led the group starting at Mt Robert Road leaving there at 9am which happened to be the same time as when the other group left Kerr Bay. Our meet up for lunch couldn’t have worked out better had we planned it. At 12.15pm the other group was settling down for lunch having just crossed the four braids of the Travers River flowing into the head of the lake. Our group joined the others to eat. We had another refreshment stop at Lakehead Hut just because it was there and looked inviting. ‘My’ group made short work of the flat track on the Kerr Bay side of the lake arriving at the bay itself at 4pm. We only had a 15-minute wait for the other group driving back from Mt Robert Road. Chris, David and Julian bravely took on the challenge each gave the other of taking to the cold, cold waters of the lake. The ladies were most impressed on one hand while completely unwilling to join them on the other. Ice creams and coffee at the St Arnaud store rounded off our day out very well.

David W says: Our group of eight worked in very well, good banter and interesting conversation. We noticed some runners and other groups of walkers but it was not too busy. There were some rowers out and a couple of fishing boats. Quite surprised that there were not too many wasps on the trail. At the jetty before Lakehead Hut, Rob tried to call the famous large eel but he must have moved. The river crossing was straightforward and on the other side we ran into the other group, so we had a lunch stop in the grass and a swapping of keys. Carrying on the group enjoyed a stop at Coldwater Hut and then a nice trail to Whisky Falls which is worth a look. Before we knew it we were at the cars and the drive back to Kerr Bay to join the others. Although a relatively easy day it is still a fair amount of walking so this fella had some refreshing beverages when he got home.