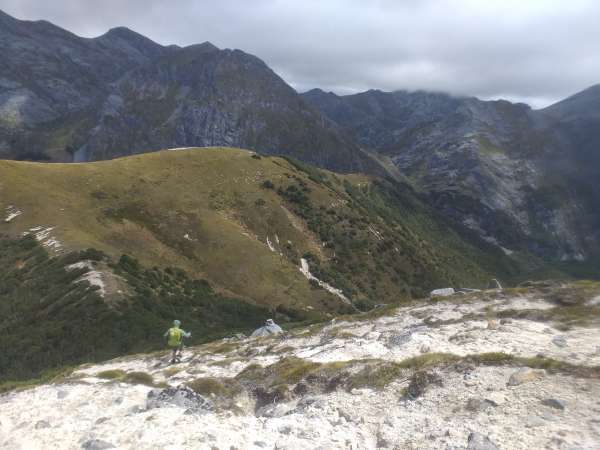 This trip began as an overnight tenting trip on the Hope Range, south of Conical Hill. However all six participants agreed on three nights out. On the Friday morning two vehicles drove to Courthouse Flat. Cattle, a helicopter and tourists delayed our journey. One vehicle was left there to allow us the option of exiting that way should we navigate our way through to Granity Pass via the Lookout Range. The third vehicle drove directly to Lime Works Road at Kaka, where we had permission to park in the farmer’s paddock. Lunchtime was half an hour into the journey on the flanks of Ellis Knob. We followed an old route through bush and up onto Conical Hill and then continued south along the Hope Range (locally referred to as ‘The Granities’). On reaching point 1244, we followed down a ridge and dropped into the headwaters of the Dart River. This was a lovely area for tenting with flat sandy areas to put up our tents and a good supply of water close by. The day had been calm with some cloud. We had covered about 9km.

Next morning the mist was resting on the Lookout Range but looked like the sun may chase it off. We packed up and followed downstream some 100 metres to where a side stream comes into the Dart. Here we picked our way up the end of a ridge. This was scrubby and steep but animal trails made it relatively easy to get through. We followed on up this ridge, which was mostly fairly open but had some bushy bits to navigate around or through, especially just before breaking out above the tree line. The mist was still evident and by now was swirling around in the cold wind. We donned on our warm gear, complete with gloves and continued up and along the Lookout Range. The mist cleared in front of us but the wind didn’t let up. Just before reaching the saddle, before point 1653 we dropped to the lee side and had lunch. Three keas entertained us with their antics in the wind. We found some cairns on the southwest face of 1653, so we sidled across the slope. We actually descended to them as we’d gone up higher before sighting them. This was a rocky sidle and went in and out of gravelly guts. By now the wind had abated and the sun was warming us. From here we dropped down a ridge, finding some old markers in the trees and a pole in the clear part. Here we followed an animal trail that sidled just below the right spur and back into the trees. Again we spotted old markers until we reached the saddle between the Owen and Granity watersheds. From here we searched around for the best way into the headwaters of the Granity. Eventually we found and followed some pink ribbons through thick scrub to a granity slip. We were able to cross this by going nearly half way down. We kicked steps into the sand and clambered up into the bush by an old red marker. We followed up the strip of bush and out and over a couple more slips. These were older and more stable than the first one. We picked up another old marker that took us into a grassy area above a bluff. A cairn higher up indicated our route obliquely up and over a wee stream. From here on through Granity Pass and to the hut was straight forward. It was good timing as the rain began just as we arrived at the hut. We had covered 8km that day.

Sunday was fine so we decided to go for Mt Owen. The alpine flowers we picturesque and again we spotted three kea. This time they were feeding just short of the top of Mt Owen. Being a sunny clear day we had expansive views. This day we covered 9.4km. There were a few empty beds on our second night at Granity Pass Hut.

On Monday morning we trekked out to Courthouse Flat. Here we were met by Vector NZ who were getting ready to do the pre-1080 drop. We had to wait for the road to be clear before we could drive out but we knew no one would be coming in as there was restricted traffic. A satisfying four days on the hoof.