An out of the way valley 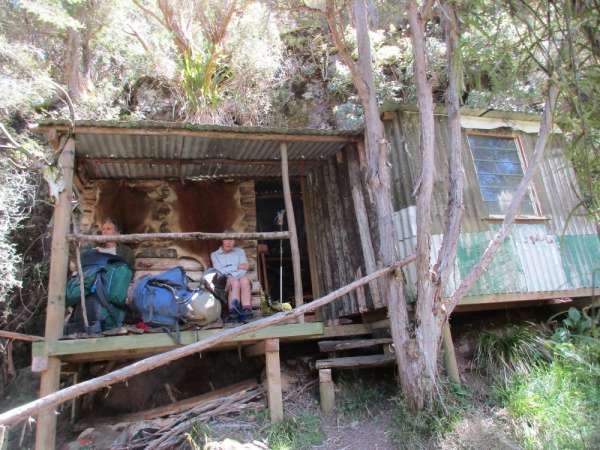 On a fine weekend four trampers travelled 14km up Waihopai Valley Road then 7km along Avondale road. Opposite letterbox no 756 we drove through a gateway and a further 7km on farm roads needing a high clearance 4WD. This avoided a 1¾ hour walk. We visited the private Tummil Hut on the hillside above the carpark then set off on the track to Lake Alexander. We crossed one branch of the river then up the well-forested narrow valley consisting of a mixture of rugged bouldery sections, easy going valley flats and some short sections of steep-sided slopes. Very pleasing were several very tall matai in the valley floor. We had nine shallow stream crossings but this number varies depending on recent rainfall and because the stream flows underground in places. The track steepened and emerged at the lower end of the lake with the hut visible on the opposite shore. After ten more minutes we broke out of the bush onto shingle flats and the six-bunk Lake Alexander Hut, taking 3¼ hours altogether. Three goats were seen on the lake edge, some of many animals sighted on the weekend. The lake is only about half a kilometre long, includes a small island, and was formed by an ancient landslide. With no water tank it needed a 100 metre walk down to the lake edge or the safer source from the creek which was only flowing above ground, five minutes above the hut.

We then set off on an afternoon jaunt, starting up the wide riverbed and after ten minutes at a large cairn we entered the bush. The track steepened with a very steep ten minute section before a steady climb to a small rock shelter after 45 minutes. From here it was a moderate climb to Wild Sheep Saddle (pt. 951) after 1½ hours from the hut. We continued above the saddle for only 30 minutes on a rugged ridge that eventually leads to the tops of Ferny Gair. There were good views but not yet a view of the lake. We returned to the unoccupied hut for the night.

On Sunday we completed the loop track by returning to Wild Sheep Saddle and dropped into the true right branch Tummil River. While not so steep, the upper parts of the valley have some regrowth obscuring track markers which could soon become a problem. The track is often easy going but there are also rugged parts with some steep-sided slopes above the creek including five sections with a rope for safety. Thankfully windfalls were cleared in May 2019. We crossed the small river then soon crossed a large clearing to the private Pig Whare Creek Shelter, a rough and rustic slab hut built onto a rock outcrop on the bush edge. The five bunk hut was built in 1998 and extended in 2016. This had taken us three hours from the saddle. Down from here the valley widened but included a small climb and four easy river crossings, then the final 30 minutes on a newish 4WD road back to the carpark, taking 1½ hours from the shelter (seven hours altogether). An interesting out of the way valley. On the way home we all enjoyed a coffee at the Renwick Roadhouse Café, as well as some fresh orchard cherries.

Lake Alexander Hut has only about 60 visitors per year, but the area is well worth a visit, despite not being easy to access. For access and gate keys phone 03 572 4803 (a donation may be requested). The fab four were Robert (scribe), Andrew, Joy and Julian.