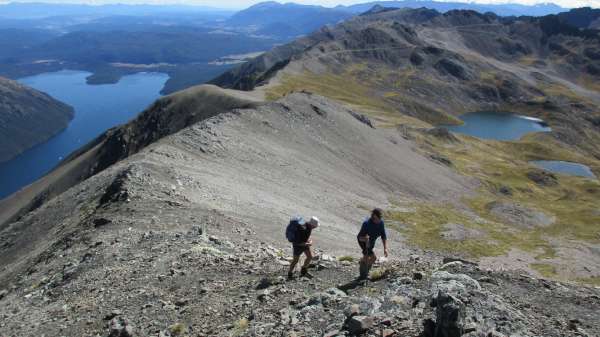 Six trampers headed up to the Rainbow skifield for a day trip also transporting five club members round from Kerr Bay who were on an overnight trip camping on the St Arnaud Range. We managed to all squeeze into two vehicles and easily motored the 25km from SH94 on a good road to the skifield carpark. Both groups went west of the carpark starting on a vehicle track heading towards the large tarn, then between this and a smaller tarn. It was easy going on lush tussock then we separated from the overnight group and veered more towards the summit. We soon reached the St Arnaud Range ridgeline and then it was a short climb to the 1878m summit of Mt McRae 330m above the skifield. The sky was cloudless and the breeze was light and we lapped up the views north to Lake Rotoiti on one side of the range and the skifield basin and tarns on the other side. The overnight group dropped their packs on the range and followed us up to the summit, then our group carried on south along the range. The rocky terrain was a bit of a scramble but easily negotiable. After we passed over pt 1880 we sidled slightly below the range, avoiding the next highpoint and aimed for a small saddle. Progress was slightly slower on rocky scree slopes before we reached the saddle west of pt 1915 after two hours. What unfolded were exquisite views of the recently named Paratitahi Tarns and the larger Paraumu Tarn at the very head of the Arnst River. Deservedly these tarns are rated by Wilderness magazine as of one of the top 15 back country lakes in NZ.

We were then enticed by the small basin with some tarns just north of the small saddle. We sidled about 100m below the range mostly on good tussock slopes and aimed for a gap in a spur east of pt 1880, knowing that there were probably bluffs at the end of the spur. We passed below the highest tarn on the way to the tussock gap then after this it was all easier going sidling across gentler slopes, then back between the two skifield tarns taking only 1 hour 20 minutes back and for a return trip of four hours altogether.

It was such a great opportunity to take advantage of the five summer open dates. The only cost was a $20 road fee donation per vehicle paid into a box besides the ticketing building at the carpark. The group was Robert (scribe), Grant, Nicky and newcomers Rob A, Roger and Kim.