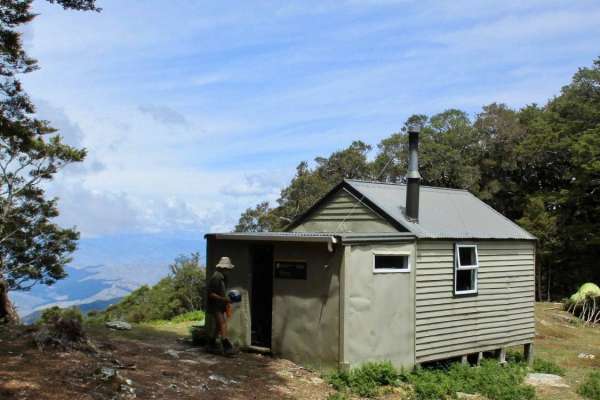 Ten trampers embarked on a crossover trip on the Wakamarina Track between the Wairau Valley and the Wakamarina Valley. At Canvastown we swapped the two cars with each group of five trampers starting from each side. The group of five starting from the Wairau Valley side headed up Onamalutu Road which continues as Kiwi Road and climbed up a good forestry road to a small carpark on a ridge. The well-graded track steadily climbs a ridgeline in good bush cover, only steepening slightly nearer to Fosters Clearing – a saddle between Bartletts Creek and Foster Creek. From this clearing we turned off onto a side track, climbing steadily for ten minutes to Fosters Hut in a clearing with good views of the ranges in the east. This had taken us only 2½ hours. Three of the group were keen to try for Mt Baldy in the afternoon. We headed back down to Fosters Clearing then followed an unmarked track along the range which climbed steadily then steeply to the 1315m summit of Mt Baldy after an hour and 20 minutes. A few goats scampered away just as we emerged from the bush at the summit. We were rewarded with good views but this was soon partly obscured by some cloud and mist on the northern end of the Richmond Range. On our descent we mistakenly started heading down the wrong track on a ridgeline past pt 1205. After realising our error we backtracked and found the correct track. This other unmarked track links back to the main track above Foster Creek and is likely used by Outward Bound students. Just after we returned to the hut the group of five from the Wakamarina Valley arrived, having taken a leisurely eight hours. The partly cloudy weather soon changed to misty and cloudy as well as quite cool. Eight people tented including one in a bivvy bag, while only two stayed in the four bunk hut.

Sunday was mostly cloudy as we continued our crossover with the first group heading to the Wakamarina Valley. We descended to cross the head of Foster Creek then climbed and zigzagged steadily then steeply to a saddle between Foster Creek and Devils Creek. After a climb to a knob we then had a long steady zigzag descent of 800m amongst lush ferns and bush to Devils Creek Hut. We really needed our brakes applied on the descent and it was a real test of the thigh muscles. From the hut it was an easier track, although undulating and with a descent into and climb out of Doom Creek. To the road end it had taken us two hours from Devils Creek Hut or 6½ hours altogether.

We were all happy to complete a good crossover of this old goldminers’ trail which was constructed in the 1870s – probably the oldest tramping track in our area.

The group from Onamalutu was Robert (scribe), Joy, Lesley, Andrew and Brian. The group from the Wakamarina was David S, Mary H, Chris, Jo and Colin.